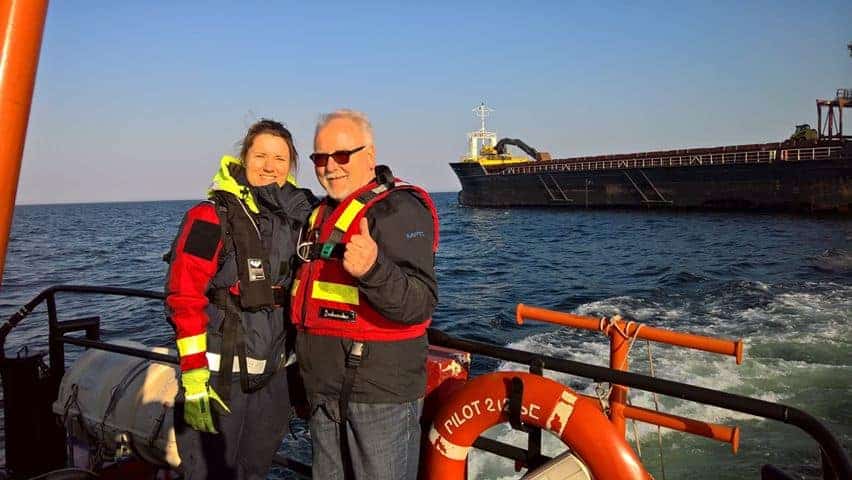 It is not every day that a father can tag along with his daughter in her profession. It is exceptionally rare when a daughter is a professional mariner. Recently, a father joined his daughter on board a bulk carrier that she navigated outbound Norrköping, Sweden.

Captain Hanna Odengrund, from Norrköping, Sweden, is a role model in the online community of Women Offshore. She is a graduate of Kalmar Maritime Academy and both a master and pilot on unlimited tonnage vessels.  Captain Hanna has worked on the water for the past fifteen years, much of that time on chemical tankers before becoming a maritime pilot.  As a pilot, Captain Hanna is a navigational expert. Her main duties involve navigating and maneuvering ships between the ports of Oxelösund and Norrköping, Sweden.

Since October, Captain Hanna has expanded her social media presence from Instagram, where she educates and inspires others with details of her job, to a blogsite where she shares even more sea stories about life as a maritime pilot in Sweden. She answers questions about the monotony of navigating in and out of the same ports all the time and even opened up about a ship maneuver that wasn’t executed as planned. “Sometimes things don’t really turn out the way you plan. I think all of us can relate to the frustration. The really hard part is assessing what happened and why. Learn from it and move on as a stronger and more competent person.” 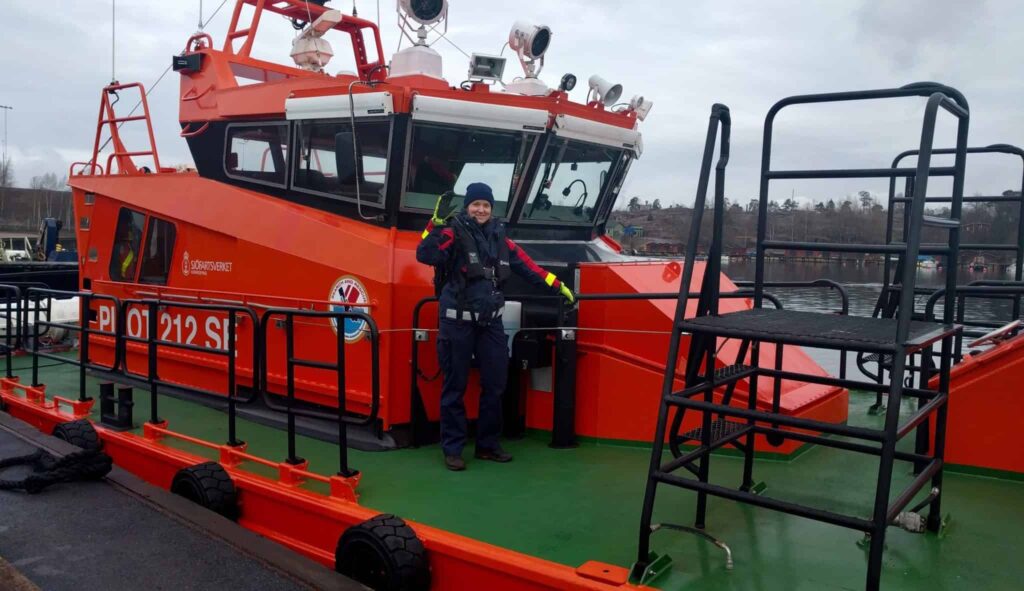 One of Captain Hanna’s latest piloting assignments, shared on her Instagram account, included inviting her father, Johan Högquist, along to observe her navigate a bulk carrier, the Norwegian-flagged, Tifjord, outbound Norrköping. The vessel was scheduled to transit from its berth in Norrköping through a fjärd called Bråviken and then meet a pilot boat at a rendezvous point 8 nautical miles off the coast of Oxelösund. Captain Hanna would then disembark the Tifjord at the meeting point onto a small boat to head back ashore for another assignment, while the Tifjord continued with her voyage through the Baltic Sea. Forty miles long, the entire pilotage would take about 4 hours to complete.

Fjärd, rocky inlet of the sea, usually found along relatively low-lying coasts. Formed by the submergence of a glacial valley, fjärds are characteristically more irregularly shaped than the fjords. Like fjords, they may be quite deep and may have thresholds at their mouths. Fjärds are often connected by mazes of channels but are not typically river-fed estuaries. 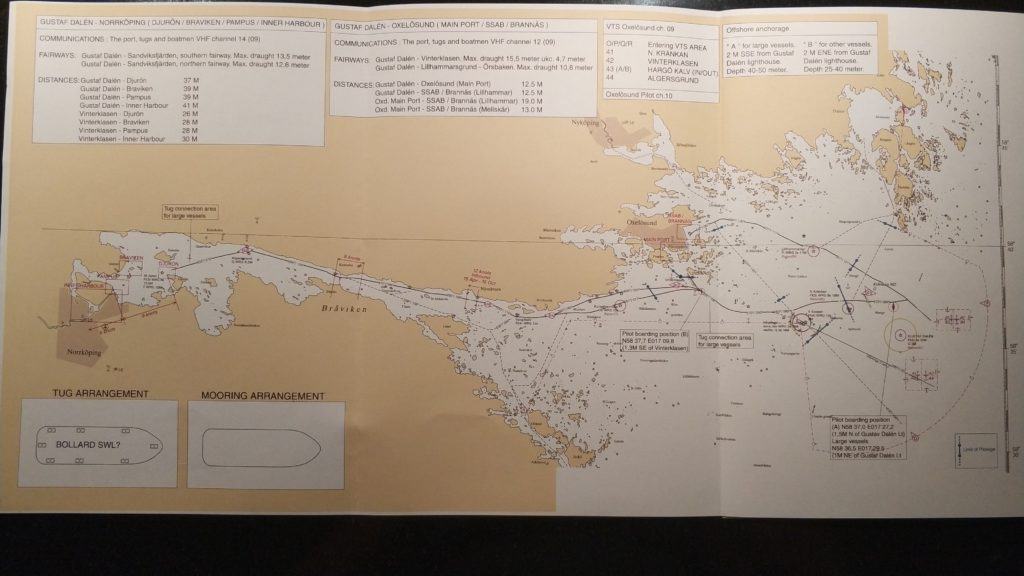 With a pair of binoculars in hand, Johan walked up the gangway of the 95.1 meter, 2999 gross-ton Tifjord to join his daughter in her element as the pinnacle of the maritime industry, a maritime pilot. He was ready to observe her in action on the bridge of the bulk carrier.

On board the Tifjord, Captain Hanna showed her father the chart (pictured above), explaining the vessel’s safe passage through Bråviken. She also briefed her father on how to maneuver the ballasted bulk carrier away from its berth.

When the ship was ready to depart for sea, Captain Hanna communicated over the VHF radio to the ship’s captain and crew, port tugs, and shore linesmen to let go the mooring lines and steer the ship safely towards the channel. As the Tifjord moved at dead slow ahead, slowly increasing speed, Johan put his binoculars to work to look out for oncoming traffic.

For Captain Hanna, this was a pilotage to remember. “It is really humbling to be able to share my life at sea with him. He served as the perfect look out,” she proudly declared after the experience.

Hanna added that her father has always been very supportive of her career, even if unconventional. She said, “I have really felt that support throughout everything I have been up to. It is an amazing feeling that I hope I can give my kids as well.” Just like her father, Captain Hanna knows the value of supporting a child’s ambitions. 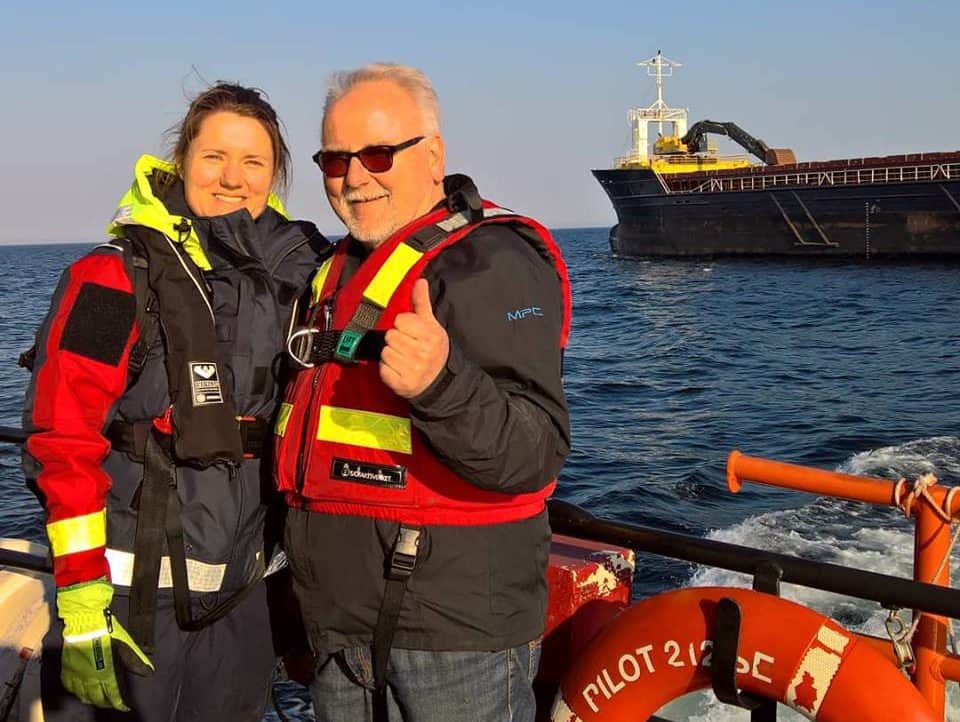 Once near the designated pilot drop off area, Captain Hanna and Johan disembarked the Tifjord by climbing down a ladder to a pilot boat. On the way back to port, they each reveled in the sunshine, salt air, and ocean spray. With a thumbs up to the camera, Johan beamed with pride.

Follow Captain Hanna’s career on her Instagram feed and blogsite, A Sea Pilot Diary. Read even more about her seagoing adventures in her previous feature on Women Offshore.