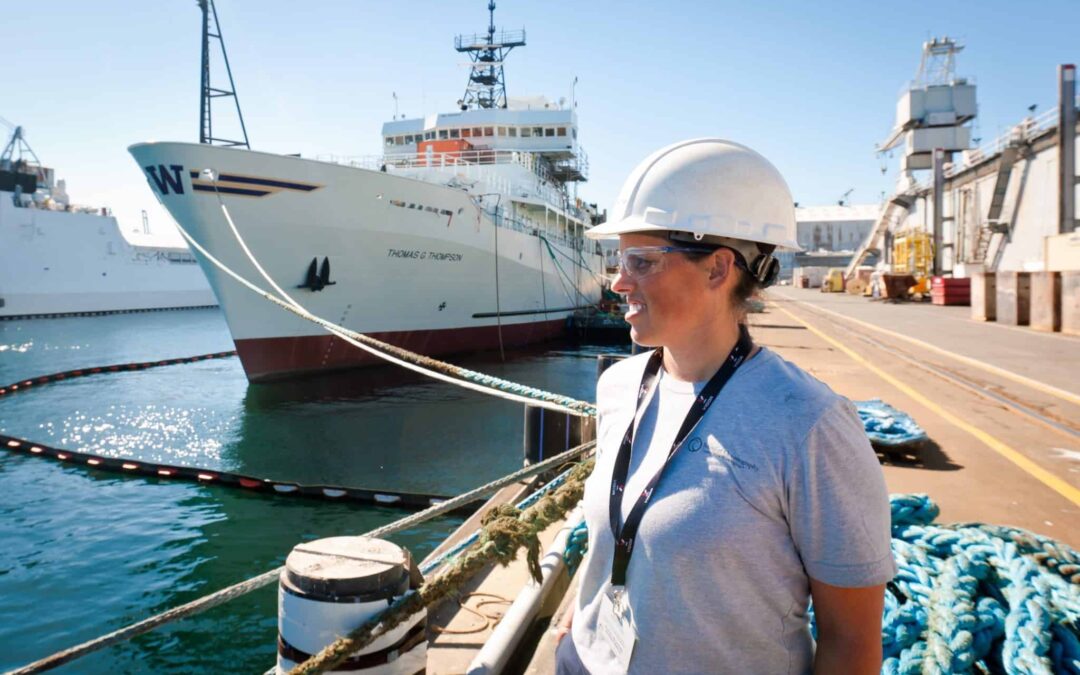 Meet Bree Bennett, a graduate of California Maritime Academy, where she earned a Bachelor of Science in Marine Transportation with a Minor in Marine Science. Women Offshore originally met Bree when she was a cadet at Cal Maritime over a decade ago, and it has been exciting to hear about Bree’s career navigating the globe since.

Bree is currently the Chief Officer on the University of Washington’s School of Oceanography research vessel, R/V Thomas G Thompson. Women Offshore caught up with Chief Officer Bree in Seattle to take a tour of the Thompson before the vessel departs for research work off the coast of New Zealand. 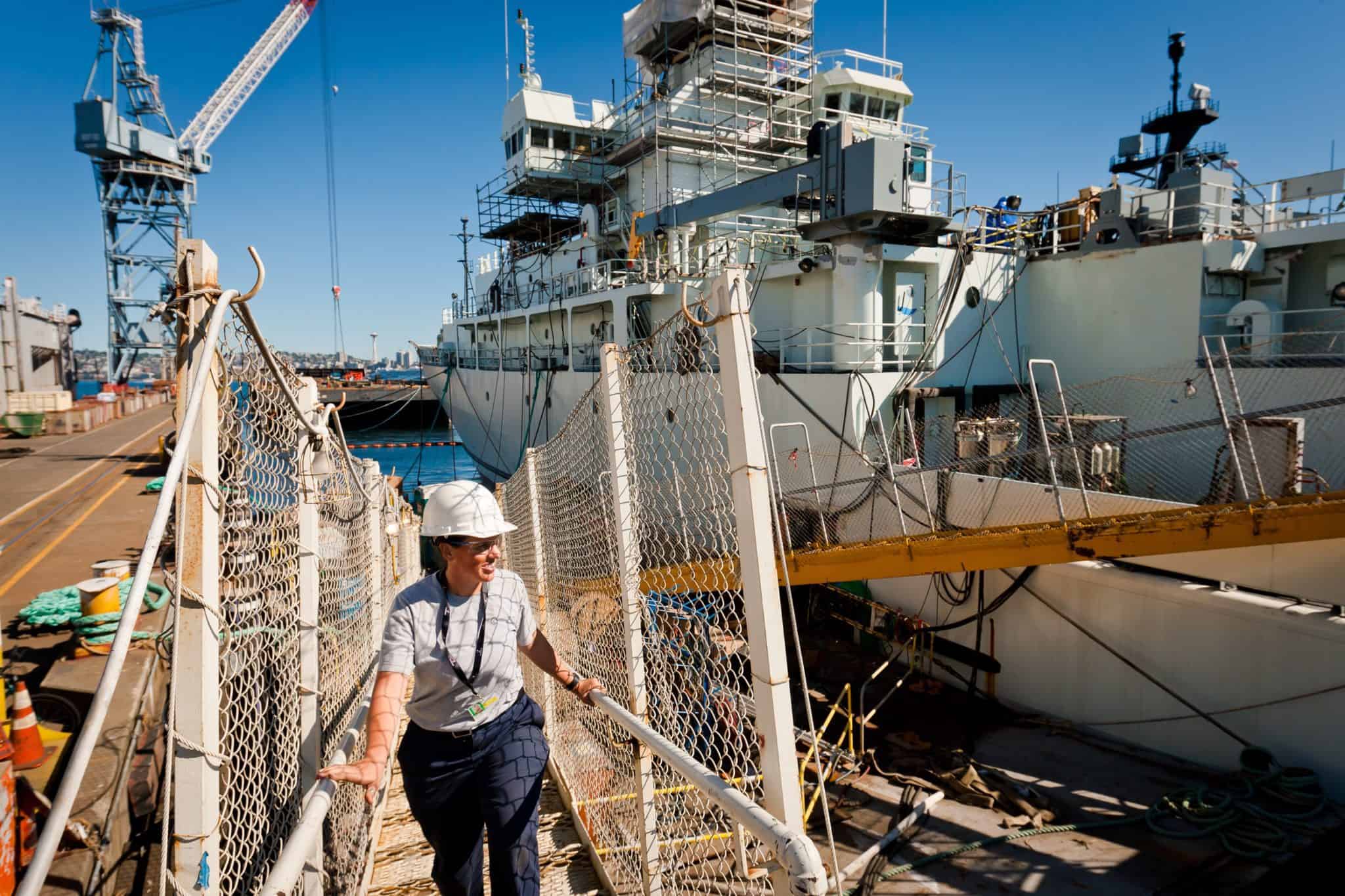 As a youngster, Bree was drawn to one day work on the water in hopes of traveling the world and learning about the oceans. As the Chief Officer of the R/V Thomas G Thompson, Bree travels the globe, experiencing wonders of the world’s oceans that even most mariners don’t see. In the past, scientists on board the Thompson have collected rocks on the ocean floor, 10,000-feet below the surface of the water, and observed erupting, underwater volcanoes. 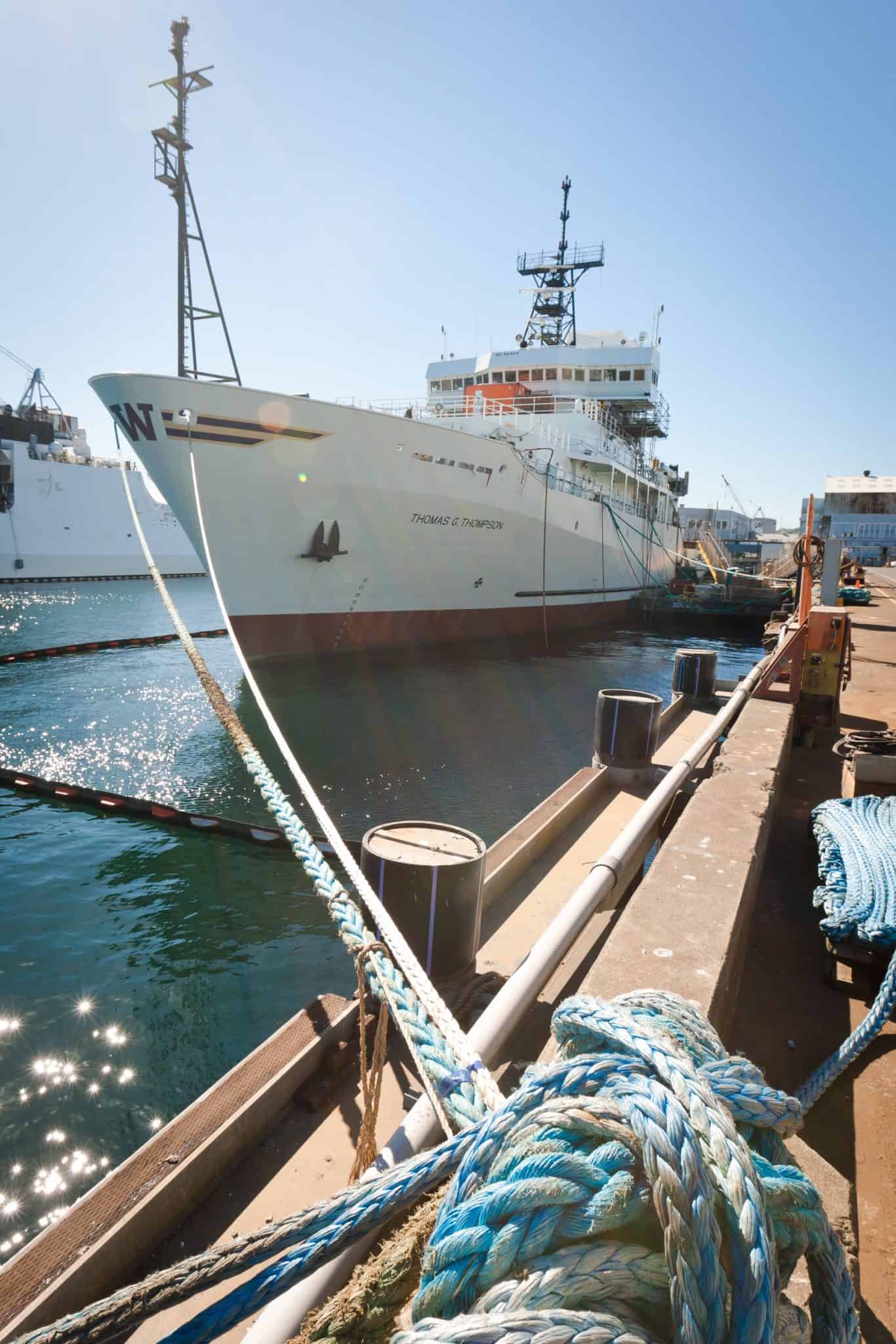 At 274 feet long and 3000 gross tons, the R/V Thomas G Thompson is known as a workhorse, spending nearly 300 days a year at sea. Home to 21 officers and crew, 2 marine technicians, and up to 36 scientists, the Thompson was constructed by Halter Marine and delivered to the Office of Naval Research on 8 July, 1991. The Thompson is owned by ONR and operated under a charter party agreement by the School of Oceanography at the University of Washington as part of the University National Oceanographic Laboratories System.

As the chief officer on board, Bree is second in command to the captain and head of the deck department, responsible for the proper operation, maintenance, and safety of equipment and spaces. She is also responsible for handling the scientific gear on board to ensure it is properly rigged for deployment, recovery, and stowage. 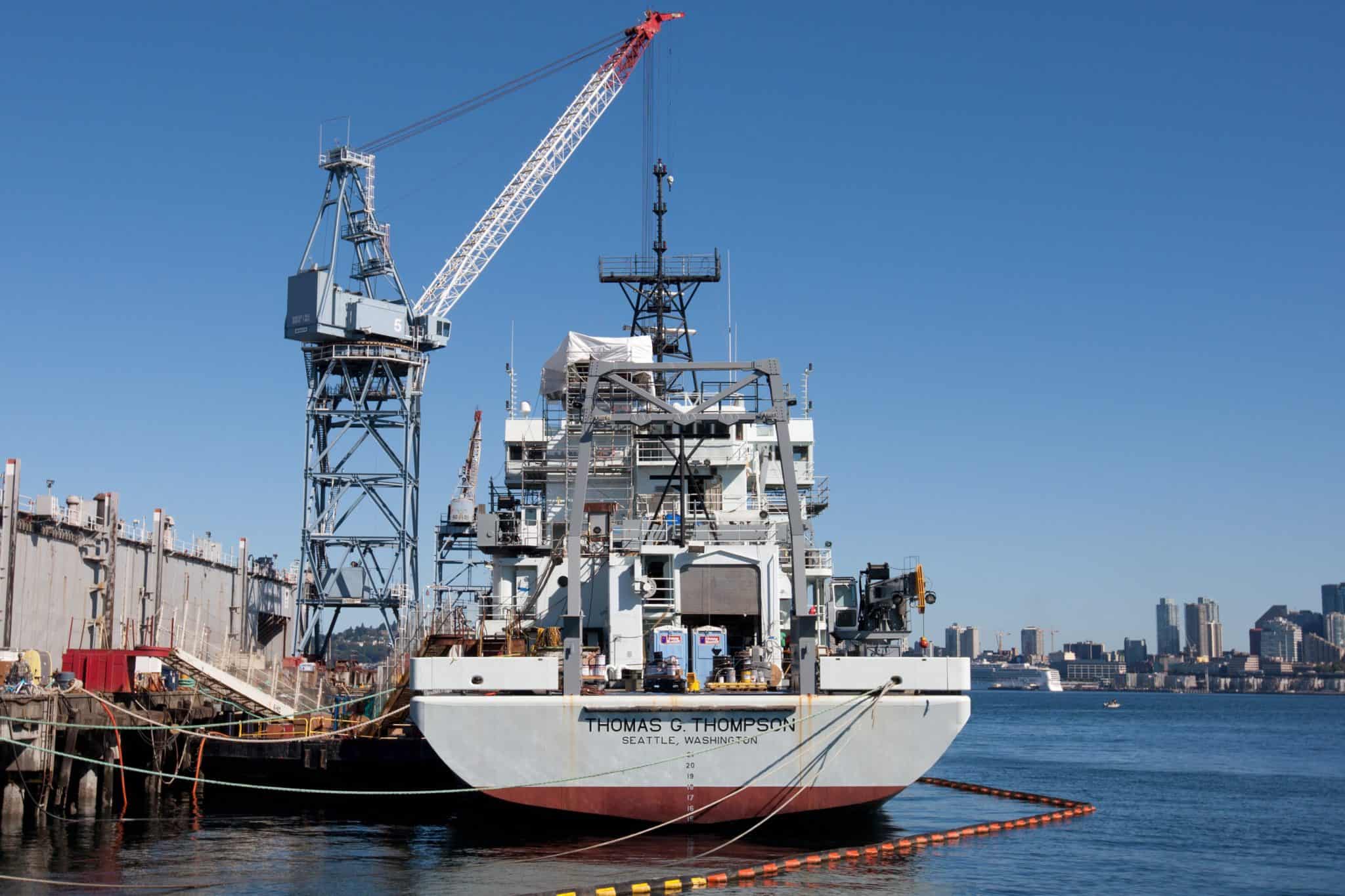 At sea, Chief Officer Bree’s typical day consists of spending 4-6 hours working on deck and standing two 4 hour watches on the navigation bridge. She is not only a seasoned mariner, but also a knowledgeable dynamic positioning (DP) operator. Scientific operations require the vessel to be stationary in the water at times, so Bree is certified to operate the vessel’s DP system in order to keep the vessel in one place, often in tight situations.

When Chief Officer Bree isn’t working on the Thompson, she enjoys teaching young mariners. Bree has spent time instructing students at Crawford’s Nautical School in Seattle and cadets at Cal Maritime’s training vessel, the T/S Golden Bear. Chief Officer Bree says, “I love helping other mariners succeed. Like everyone, I’ve made mistakes and had successes. I love passing along my experiences, both in the classroom and on board. If I can make something easy for a shipmate or a student, it makes me day!” She also talks about one day working permanently onshore as an instructor, but for now, she is gaining experience to become captain. 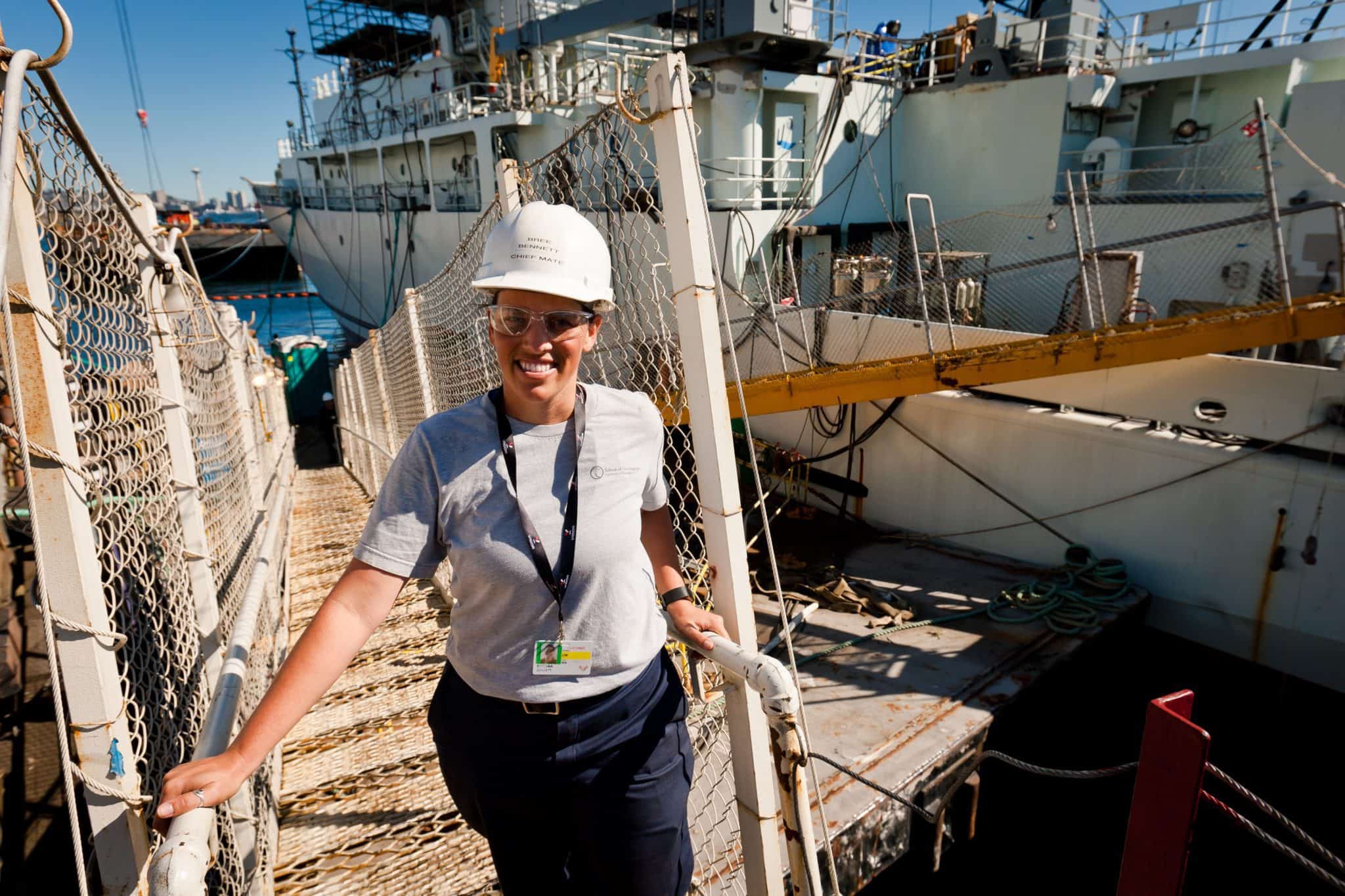 Women Offshore greatly appreciates the time Chief Officer Bree was able to spend answering our questions and showing us around the R/V Thomas G Thompson. We are so impressed by her accomplishments and look forward to writing about her again when she is captain!

Photos by Ally Cedeno of WomenOffshore.org