In the Galley with Chief Cook Melissa McCartney 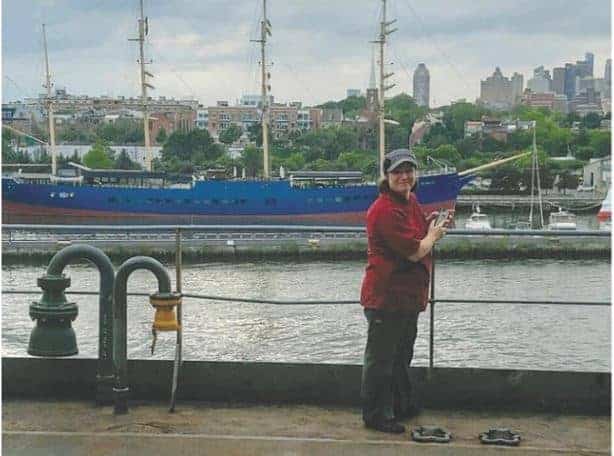 Melissa McCartney’s passion for the food industry led her to share the culinary arts with others.

In 2016, Melissa McCartney was happily working as an instructor and high school recruiter at the Le Cordon Bleu in Miami. A graduate of the Culinary Institute of America, who also holds a bachelor’s degree from Pennsylvania State University in workforce education and development, Melissa had been working in the food industry for over 20 years and loved sharing the culinary world with her students at Le Cordon Bleu.

A little over a year after starting at Le Cordon Bleu, Melissa found out that the local institution would close. Her world felt as if it had been turned upside down as she considered what to do next.

Looking for work in the food industry, Melissa wanted a job that was both a good fit and a long-term career. She scrolled through an alumni page of the Culinary Institute of America and became fixated on an advertisement for the Seafarers International Union (SIU), an organization that represents professional merchant mariners sailing aboard U.S.-flag vessels in the deep sea, Great Lakes and inland trades. SIU members work in the deck, engine, and steward departments on board a wide variety of vessels, including container ships and tankers, military support ships, tugboats, and passenger ships. Staring at the ad, Melissa realized she could take her culinary skills and love of food to sea to become a chief cook in the US merchant marine.

“This career gives me experiences that I never would have seen at a ‘regular’ job.” – Chief Cook Melissa McCartney

Working on a ship had been a dream when she was young, however Melissa did not know much about it. Intrigued, she called the number on the advertisement. Melissa gathered the information over the phone that she needed to make a decision to go to sea and started filling out the necessary paperwork to prepare for this next stage of her career.

Fast forward almost three years later, this culinary expert who found a career in the US merchant marine is grateful to work on ships that travel to countries around the world. “This career gives me experiences that I never would have seen at a “regular” job,” Melissa said.

To give back to her industry, Melissa shared her expertise in her self-published cookbook called the Seafarers Cookbook. She first published the book last year, after writing out her recipes to make a crew happy with the ingredients, tools, and equipment found in most galleys. Last month, Melissa released the 2020 edition that has even more recipes. From almond French toast to grilled Mediterranean marinated lamb and cream cheese cupcakes, Melissa’s latest cookbook spans over 100 pages.

In her cookbook’s introduction, Melissa encourages her readers to be creative. Her recipes are about methods and ratios, and once someone is comfortable with her style, Melissa believes her readers should add their own favorite flavors and ingredients. Melissa hopes that the Seafarers Cookbook will enable those working in a galley to do it in a way that “makes their job easier and more fun.”

To support Melissa, download a digital copy of the Seafarer’s Cookbook on Amazon.  Learn more about the Seafarers Cookbook and Melissa’s adventures on the high seas at seafarerscookbook.com.