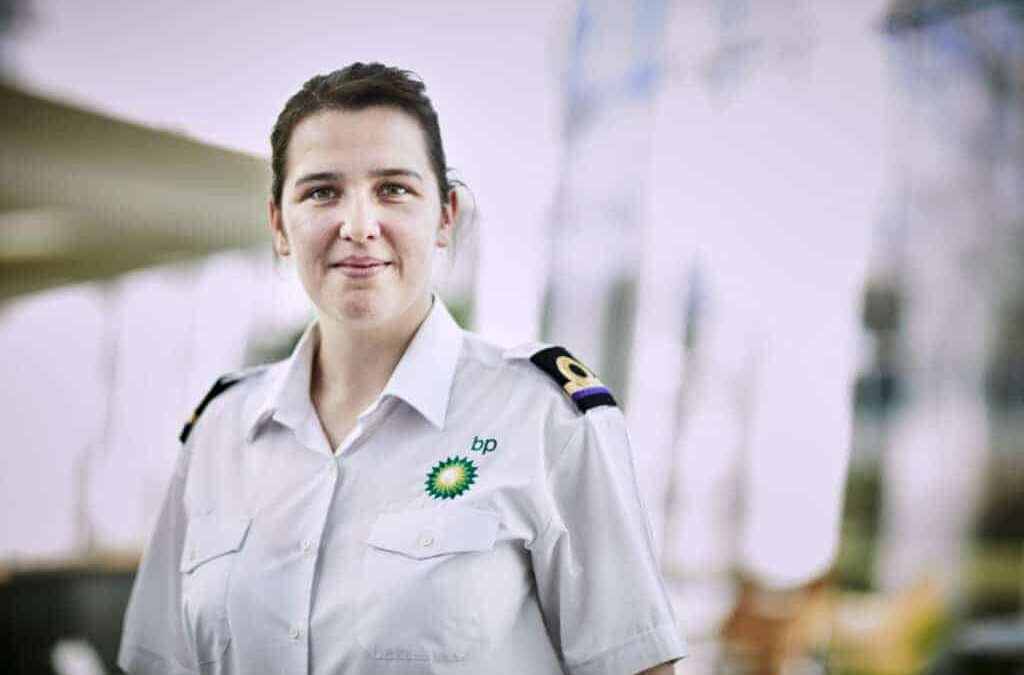 Scotswoman, Jayne Murray, shares with Women Offshore her life at sea as a marine engineer. Her inspirations and challenges reveal lessons learned from powering large ships across the globe’s waters.

Far from the concrete jungles of the world’s metropolitan city centers lies a collection of islands, extending off the northwestern coast of Scotland, rich in Celtic and Viking cultural roots.  A land steeped in such a colorful history, inevitably instills an adventurous spirit to those who inhabit that ground.

Meet Scotswoman Jayne Murray, from the Isle of Lewis, off of Scotland’s north western coastline.  Jayne is a graduate of Fleetwood Nautical College, where she earned a foundation degree in marine engineering through the BP cadet programme.  She acquired her first job as an engineer in 2013, and is currently sailing as a Fourth Engineer for BP.

BP is one of the world’s largest, publicly owned oil and gas companies. Unsurprisingly, the company has a long, global reach in which it operates in over 70 countries, some of which Jayne has been able to check off her travel-bug list.

“I have worked all over [the world]! My favourite place I have been to is New Orleans. It was one of those places I would want to go back to. A lot of the other places that we visit are in the middle of nowhere because of the size of the ship and type of cargo we carry. But those places are fabulous in their own way, because you get a taste of the local side of [the culture] rather than the tourist side.”

However, working at sea wasn’t necessarily something Jayne considered as a career choice upon leaving school:

“Before I joined BP, I was working in a desk job and was stuck staring at Excel spreadsheets all day, which I didn’t really enjoy as I like to be active. I am quite a hands-on person, and I just needed to do something which was a career but also provided the financial support that you get when you are studying. But it wasn’t until I went out to sea that it clicked, and I thought, this is what I should be doing.”

Far from the monotonous, computerized sheets of data that she was once processing, Jayne’s responsibilities while at sea now include overseeing the ship’s engine room and completing planned and unplanned maintenance on the equipment.  She is also a member of an emergency response team and has specific duties in the event of an emergency on board.

As it turns out, that ‘click’ Jayne felt was well and truly the feel of a perfect career fit.

“I like the variety that working on the water offers me. Every day is a bit different. I rotate between shifts, taking on lots of different responsibilities.”

What exactly does this type of daily variety look like?  Jayne explains:

“Let’s take a day when I am the Duty Engineer (which happens one in every four days).

I arrive at the engine room at 7:30am, and I get a handover from the previous Duty Engineer, wherein we discuss whether we’ve had any alarms or problems, and just an overview of the general conditions of the plant. Then we have a morning meeting with the Second Engineer where we discuss what the work plan for the day is, and I get my permits for any work we have planned.

From there, I go and get the incinerator online – that’s my designated equipment. Next, I would go and take tank soundings, and update my oil record book for any transfers I completed. I would then get the tools ready and prepare for the planned work I have. So, for example, if I needed to do a service on the air compressor, I would prepare the tools and get the lubricating oil ready for that.

We then get a 30 minute break in the morning, after which I complete the engine room log. At midday, we all have lunch together.

After lunch, I would do my planned maintenance, then before leaving the engine room for the day I would do a full inspection and complete a checklist to ensure everything is compliant with our standards and that it will run safely overnight. At 17:00, we go ‘UMS’, which means the engine room is unmanned so we have to set the alarms to sound in my cabin and the public spaces until the morning.

After work, I normally go the gym, have some dinner and maybe watch a movie and socialize. We are a close-knit group on the ship and people are really friendly.”

Notwithstanding, there are challenges in every workplace environment.  Working in those locations that are remote and removed from civilization add even more complex elements to those obstacles, as additional support, help and supplies may not be readily available.  Overcoming these adversities provides a heightened sense of accomplishment in such offshore arenas, and it is echoed in Jayne’s own words as she describes her most challenging offshore experience to date.

“The last trip I had was challenging for the whole engine department.   But through those challenges we had an opportunity to help out other areas of the ship and learn a lot. I worked hard, and at the end I had an excellent appraisal from the Second Engineer and Chief Engineer, and they both recommended me for a promotion. That was great!”

As our interview with Jayne drew to a close, she answered the final two questions with some sage advice:

“I think women in shipping need to be more open about their stories. Women can be discouraged by the fact that it tends to be a male-dominated environment.  Yet, I have never found myself the only female on board and am never left out of any activities. Everyone works together as one family, and I get on well with my colleagues, both the women and the men. I don’t feel any discrimination.

Furthermore, if you do decide to start a family, you do have the opportunity to move into an onshore role, whilst leaving options open to come back to sea, should you choose to.”

What piece of advice you would give you someone starting out in your industry?

“Go into the industry with an open mind. I had a lot of preconceptions about life at sea – cramped conditions, no luxuries, etc. But, when I started, I was quite impressed with the cabin sizes, the social areas and the food. And the people were very nice and friendly. You end up settling in quite easily. The hardest part for me was getting used to fact that I needed to get up early in the day, have a full day of work, and the heat in the engine room! That was something I found quite hard on my first trip, but you get used to it very quickly!”

Jayne, we are so delighted that you were able to share a glimpse into your life offshore with Women Offshore and our readership!  We will continue to cheer you on and follow your career as you ascend the ranks!

Are you interested in a career at sea? BP’s UK Cadet Programme opens on November 1st, 2018. Learn more here.