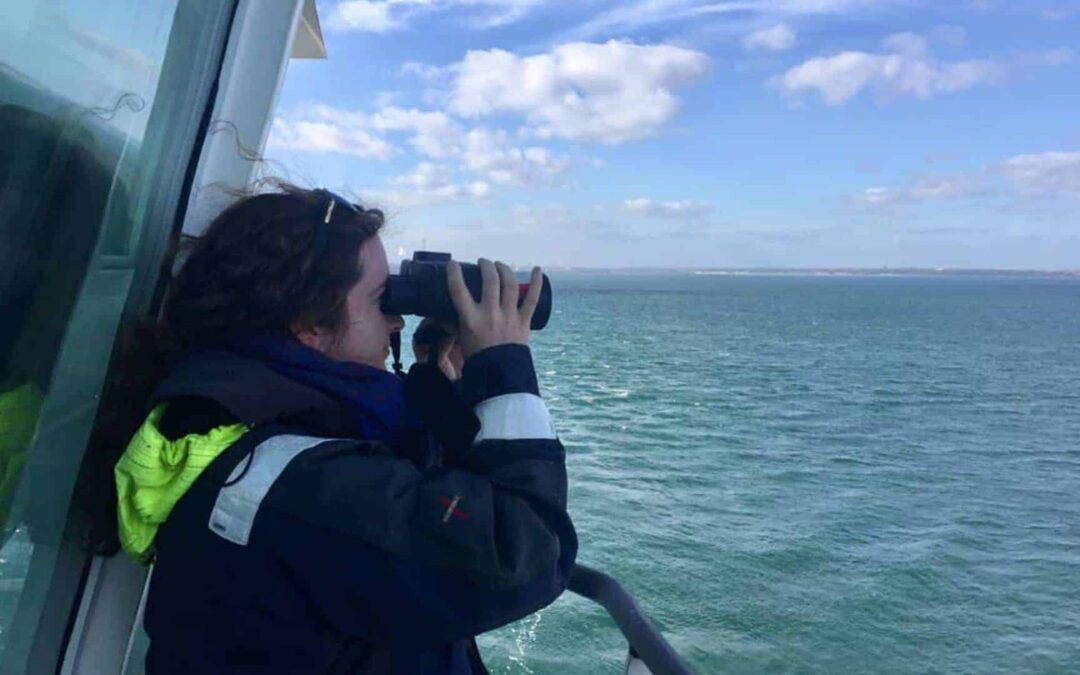 If you’ve ever seen the show Vikings, you know exactly what Wicklow County, Ireland, looks like, as it was filmed there. Vibrant green hills and valleys give way to crescent bays that welcome the Irish Sea. Its easterly breezes draw in the salt air and reassure even the blind that they are in a sea centric place. It should follow then that growing up there would have her marching down to the water’s edge, hopping on a boat and disappearing in the sunset, right? The mariner’s path is rarely linear.

“I liked science and the environment.” Meadhbh Quinn quips. It is ironic to me this was her entrance to the sea, as many of her childhood memories wax poetic stories of generations of her seagoing family; fishermen, merchant marines, lifeboat crew and the like. Pursuing a general science degree she took many marine courses as she became fascinated by the complexity of marine mammals and their lives, particularly whales and dolphins. This complimented her environmental intrigue, which resulted in her pursuit of marine mammal protection, as a Marine Mammal Observer (MMO).

Armed with a Bachelor of Science Degree in Zoology from the University College Cork and an internship with the Irish Whale and Dolphin Group, Meadhbh entered the workforce. Working on research vessels increased her aptitude in species identification and survey skills, as well as strengthening her sea legs! Fisheries research and a thorough grasp of marine ornithology only added a few more golden sea stars to her already dazzling resume. 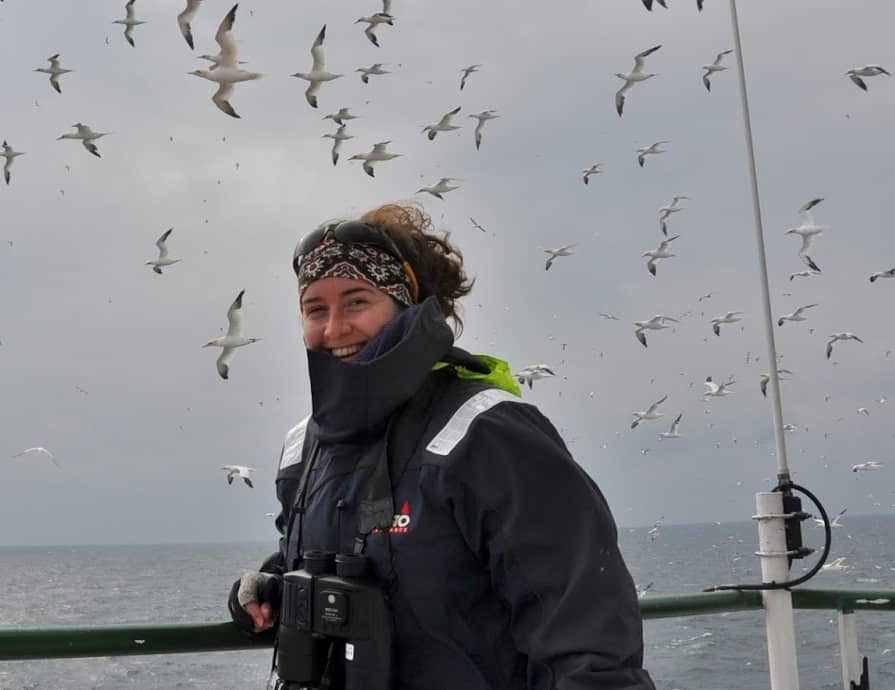 As an independent contractor, Meadhbh employs herself on a range of coastal and offshore projects implementing guidelines and codes of conduct designed to minimize auditory disturbances and threats to marine mammals, like those generated by drilling, seismic and geophysical surveys, pile driving, blasting, and dredging. She deciphers whether or not a vessel can begin operations by conducting visual watches for marine mammals within an exclusion zone, typically a 500-1000 meter radius around the vessel or sound source.  If mammals are present, she may delay operations, or even shut them down entirely until the mammals have left the zone. She also communicates with vessel crews, clients, and contractors to ensure compliance and implementation of mitigation measures, collection of data, writing scientific/technical reports, mapping, and data management.

I ask her whether there are ways to explain to clients that the harmful effects are bad for the bottom line? “Do you or can you make a client actually care about this?” “Often it’s not about making the client care.” Whether they care or not, she is required to be there for the client to meet licensing requirements. “During start up meetings with clients, we explain the guidelines, and how that relates to their operations.” Hearing is the predominant sense relied on by marine life for a range of critical natural functions: communicating, identifying and capturing prey, navigating, perception of environment, and detecting predators. Based on these hearing sensitivities, industrial underwater noises can render marine mammals extremely vulnerable. The effects range in severity, and can include damage to body tissue, decompression sickness, hearing damage, displacement, disruption of social bonds, stress, increased vulnerability to predation, and even stranding.

Meadhbh often finds herself queried by curious crew members. Once asked by the bridge team what it’s like for animals to be exposed to underwater industrial noise, she quickly responded, “Remember when we had that issue with the propeller in the aft accommodations? That horrible vibration that was so loud you couldn’t escape from the sound anywhere and it was impossible to sleep or relax?” It clicked for them right away.

“We are not outliers. To work at sea is not solely the domain of men, but rather anyone who has the emotional and technical aptitude for it.” – Meadhbh Quinn

Working offshore isn’t always positive for Meadhbh though. A dangerous situation arose when working on a vessel as a fisheries observer in European waters. The area was highly regulated, and the regulations dictated she sign paperwork to state the proposed operations complied with those regulations. Meadhbh had become aware of illegal and non-compliant activities of the vessel and its crew, and as a result, she refused to sign paperwork that would allow them to operate. The following events were frightening; harassment, intimidation, coercion attempts, and more. She managed to sneak to the vessel’s satellite phone and call her office. “My coordinator quickly realized something was wrong. He began asking me ‘Yes or No’ questions when he realized I couldn’t speak freely.” The office quickly decided the situation was extremely volatile, and she needed ‘007 level extraction. Repatriated a day and a half later to a nearby naval patrol vessel, she felt temporary relief, only to realize the inspector sent to escort her home couldn’t be trusted either. She gratuitously found comfort in three female crew members onboard, who shielded and supported her when she felt desolate and overwhelmed.  “Despite a mutual language barrier, they made up a bed for me in their cabin, shared what they could and made me feel at ease.” The story only amplifies my appreciation for the power of empathy, especially as it is experienced and conveyed by the female mariner. Sometimes doing your job makes you the hero. Her actions not only dictate respect for the environment, that which gives us purpose, but demand a positive process for those in her field. To use a Covid-19 phrase, she is literally essential.

I am compelled by her passion and knowledge and experience, and I ask, “Why do you do it? Why do you love it? What keeps you coming back for more?” She answers in her delightful Irish accent, “The freedom. I’m my own boss. While there are downsides to being self-employed and having an unpredictable schedule, the pros are having a choice over the jobs I take, and when I take them. The sea allows me to be still, appreciate the moment, and it teaches me about myself.” Preach sea sister.

As many of us do, she fell into it. She had no idea she could go to sea with her passion. “That’s why ‘Women Offshore’ is such a great resource. It highlights women in various maritime sectors excelling across a wide range of maritime careers, and it connects us all. We must tackle gender stereotypes at an early age so children don’t grow up with the concept of gender segregated roles, and so this bias doesn’t transmit to the workplace.”  As children grow, their perception of their options must widen, not narrow. “We are not outliers. To work at sea is not solely the domain of men, but rather anyone who has the emotional and technical aptitude for it.”

About The Author: Julie Schaeffer

Julie Schaeffer is a graduate of California Maritime Academy and holds a USCG unlimited 3rd mate license. Growing up sailing and boating imbued her with an early and deep passion for being on the water. In her free time, Julie cycles and volunteers with dogs. Her other loves are cooking, making people laugh, writing, scotch, horses, and senior doggies.