Walking for a Cure While Offshore 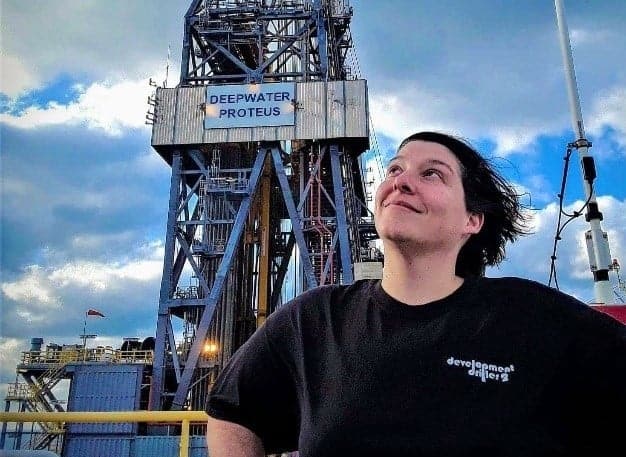 I work on an oil rig in the Gulf of Mexico as a camp boss. That sentence usually entices looks full of “Are you kidding me?”

This conversation happens mostly when I am in Michigan where I was born and raised (and still live when my hitches are done). Up there, not a lot of people know anyone who works offshore, especially not a woman. The usual question follows, “Do you feel safe?” and I always reply, “Are you kidding me, I have a 100+ brothers ready to take up for me in a heartbeat!” As the campus boss, I bake for them, so maybe it is more like I have a 100+ big kids who love chocolate chip cookies and rice crispy treats. However I look at it, the most important part is that I have an offshore family. Uniquely enough, it is my offshore family who helped save my life.

Before I started offshore, I attempted the 3-day, 60-mile Susan G. Komen walks. I say attempted because I had yet to walk all 60 miles (taken out by blisters and lost toenails).  Determined, I decided I was going to walk a third time and complete all 60 miles, even if I had to crawl across the finish line. So, armed with the support of my night cook, who was the only other female I worked with on my rig at the time, the Danny Adkins, and promised to train with me, I signed up. Training is not the hard part, well it is, but not as hard as asking for donations for the $2,300 minimum needed to walk.

Determined, I decided I was going to walk a third time and complete all 60 miles, even if I had to crawl across the finish line.

I shyly approached my rig’s offshore installation manager (OIM) and asked if I could put up a flyer, and maybe raffle off some desserts. Slowly but surely the money came in, and I had all the funds needed to participate in the walk again; this time with gobs of determination. 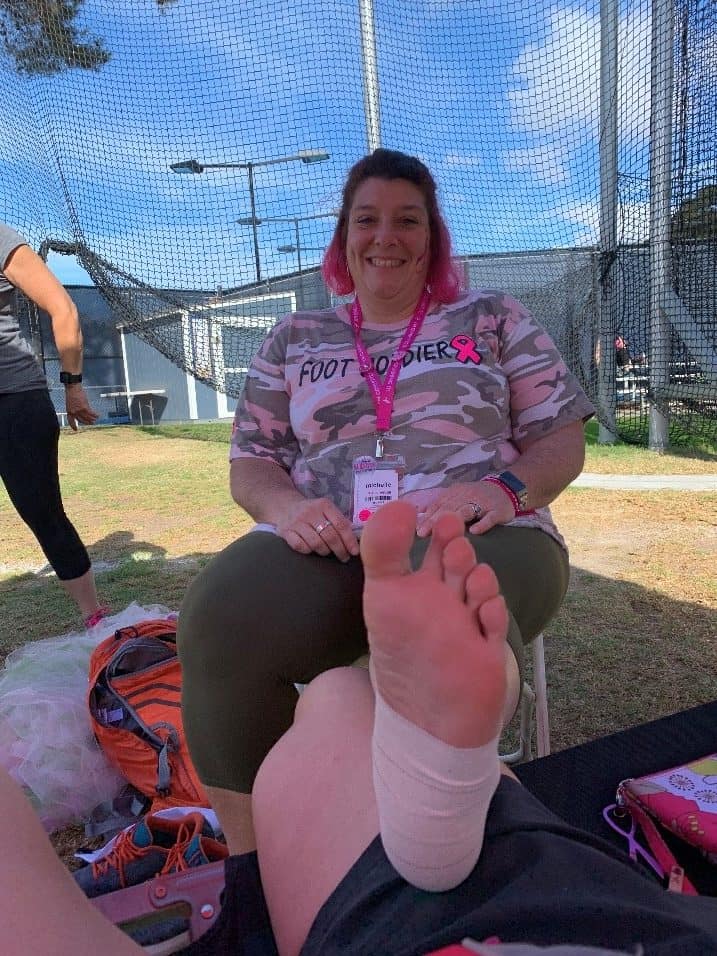 I finally completed all 60 miles and, feeling invincible, I signed up for 2 walks for the very next year; one in Cleveland and one in Tampa. When I told the guys on the rig I had signed up for the next year, the Health Safety and Environment (HSE) adviser, John Woodward, kicked into fundraising overdrive. Even though I was transferring rigs, he still insisted on buying a video game system to raffle off for me. The efforts of that crew sent me to my first walk of the year in Cleveland. Little did I know, this was the walk that would alter my life forever.

During that walk I met a gentleman named George Nummer. George was 85 years young, walking his 32nd walk and SLOWED DOWN because he saw I was struggling. During our time together I found out George’s story. He wanted to make a difference in the world after the pain and tragedy of 9/11; so he walks for breast cancer.  But George goes one step further; he asks the women he meets along the way to make him a promise. The promise is simple: schedule a mammogram.

So, after meeting George and at 37 years old, I kept my promise and I got that mammogram. I figured it would be a good baseline when I started getting them annually after 40. I completed a successful 60 miles, wrote my thank you cards to the guys on the Danny Adkins, and I moved on to work as a baker on a new vessel, called the DD2.

Six weeks before my next walk in Tampa I was not sure if I would be able to go because I had yet to raise the funds. I asked Captain Lee Crowe, the OIM, if I could have a 50/50 raffle and put up a flyer. His response was “Absolutely!” He championed me at the safety meetings and pre-tour meetings, and by the end of that hitch I had raised the money I needed. Off to Tampa I went, crushing another 60 miles toward a cure.

But George goes one step further and he asks the women he meets along the way to make him a promise. The promise is simple: schedule a mammogram.

Keeping a promise to a complete stranger may seem crazy to some, but I kept my word to George and went to the appointment. When I got a call from my doctor that evening telling me that she found something that she wanted further tests on…well let’s just say shocked might be an understatement.

Things moved FAST. The next thing I know, I hear the surgeon tell me that I have cancer; I was speechless. But, I was lucky. It was stage 0 which meant a simple surgery and 36 rounds of radiation. Had I waited 3 more years until my 40th birthday I might be telling a different story. The surgery and radiation were a success, and I have needed no further treatments.

This year is my 5-year cancer free anniversary. So what better way to celebrate than to participate in another 60-mile Susan G. Komen walk, right? I reached out to my offshore family on my current rig, the Deepwater Asgard, and once again, I was thankful for their generosity. Even more beautiful was that the crew of a previous rig of mine, the Deepwater Proteus, led again by Captain Lee Crowe, organized a solidarity walk on the helideck as I walked my 60 miles in San Diego. They cumulatively walked 243 miles and raised over $1000 more dollars for a cure. Many of the men and women who walked had been personally affected by breast cancer through family members and loved ones. This was their way of not only supporting me, but also championing others who have been through a cancer diagnosis. I was, and still am, completely blown away by their show of support.

So now, when people ask me about my job I get to tell them all about the generous, caring, and crazy rig family I have become a part of over the years. My occupation might not seem conventional to those I meet, but I would not trade it for the world. My rig family gave me my life, and I will remain forever grateful.

About The Author: Michelle Yelovina

Born, raised and residing in Michigan, Michelle Yelovina has devoted her life to culinary arts, specializing in baking and pastries. The last 5 years, she has worked for Aramark Remote Worksite, spoiling people offshore with her pastries and enjoying her time off traveling, fly fishing and spending time with friends and family.

Deepwater Dames: For the Love of 2nd Base