Deepwater Dames: For the Love of 2nd Base 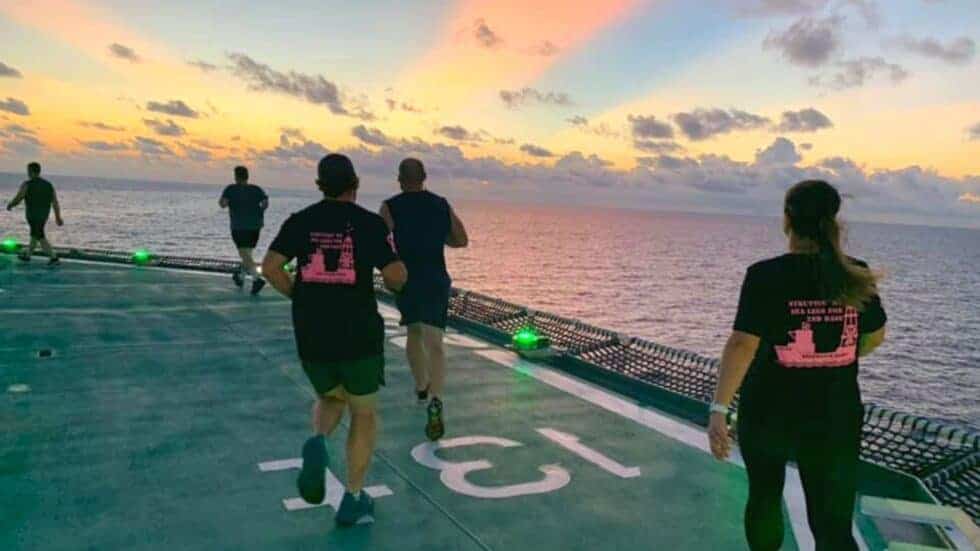 From building gingerbread houses with the crew to epic custom birthday cakes, Aramark Camp Boss Michelle Yelovina always brings something special to the ships she graces. Most recently she found a way to “shed a little light-hearted fun” that not only raised money for a cause close to her heart, but also inspired a little friendly competition between two offshore drilling rigs located in the Gulf of Mexico; the Deepwater Proteus and the Deepwater Asgard.

Michelle teamed up with former Transocean DPO Amanda Locke aboard the Asgard to create “Deepwater Dames” in the Susan G. Komen Race for the Cure. Michelle has been a long-time participant of the walks both before and after her own breast cancer journey, and Amanda signed on for the upcoming 2021 Chicago walk after her mother-in-law was recently diagnosed.

The Race for the Cure is not for the faint of heart; the 3-day, 60-mile, Susan G. Komen walk is grueling. Despite the difficult nature of the event, many walkers, like Michelle, look forward to the annual walks. Unfortunately, the 2020 walks were cancelled due to Covid. Determined not to miss a chance to walk for the cure this year, the Deepwater Dames decided to hold their own event offshore. Participants were rallied aboard the Asgard where they were stationed, and (with the help of the Captain) they challenged Michelle’s previous rig, the Proteus to a walk-off. 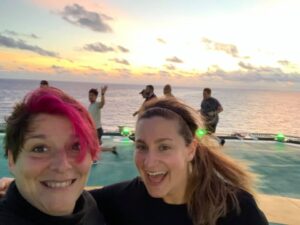 It should be noted that walking for the cure was not new for the crew aboard the Proteus; last year the Proteus raised over $2,500 and held a walk of solidarity while Michelle powered through 60 miles in the San Diego Susan G. Komen event.

As a result of the proposed walk-off challenge, spirited emails began passing between Captain Richard Smith (Asgard) and recently retired Captain Lee Crowe (Proteus). Both sides were equally determined to out-walk and out-fundraise the other. The fierce competition was set into motion when Captain Smith initiated the challenge. He wrote, “The DGD will be hosting a mini walk on the helideck to help [Deepwater Dames] raise donations for cancer awareness. I respectfully challenge to DPT to a helideck walk off, where the [winner] will have the honor of dousing their OIM with a bucket of [ice] water.” He confesses later in the email that he was not entirely keen on the ice.

Not to be outdone, Captain Crowe fired back. “On the Proteus we don’t do ‘mini’, we only do MAX! We will crush your team!” He reiterated how last year the Proteus logged a total of 242.8 miles. Captain Crowe went on to bring some solidarity to the contest, “If it affects 1 out of 4 women in the world, then it affects us all. You and I have been personally touched by this.”

Captain Smith responded and, in the spirit of contest, added a little warning to those aboard the Proteus, “The [Asgard] will gladly take on the role of underdog for this event. Remember – Apollo Creed did go down and the Mighty Casey did strike out!” And so with that, the stage was set for an epic match between the two drillships.

Last year was riddled with rough seas for the offshore industry; the walk was a refreshing change of pace and inspired comradery focused on a worthy cause.

After weeks of prep (and competitive emailing), September arrived, and the offshore personnel were ready to go. Michelle and Amanda had all sorts of goodies in store for the participants. They sold 170 T-shirts and raffled off various items including a growler, a candy snack pack, and bundles that included personal yetis paired with a crocheted afghan, assorted teas and famously delicious Michigan coffee.

Day 1 of walking was the busiest for both rigs and they were neck and neck by midnight. Proteus reported a total of 105.6 miles for opening day and Asgard was right on their heels with 105 miles logged. Totals were not shared between the rigs and surprisingly, both completed exactly 83 miles on Day 2. The total mileage was a number guarded carefully by each rig. Neither rig wanted to give up their progress; a move which might incentivize the other team to pick up the pace.

Day 3 began just like the others, with walkers and runners racking up miles on their respective helidecks. But a storm was brewing… quite literally. Hurricane Sally was encroaching on the rig’s positions in the Gulf of Mexico. And even though the finish line was in sight, an all stop was called by both parties for the safety and well-being of the walkers and runners. It was time to tally up their laps and share their totals.

Even with a bit of weather, the weekend-long event was a fantastic success and together over $4,000 was raised in support of the Deepwater Dames for Susan G. Komen, which focuses on cancer research and finding a cure for breast cancer. In a closing email Captain Crowe made the suggestion to include “all [Transocean] rigs in the Gulf of Mexico” next year and make it less of a competition and more of a “unified show of force” in support of breast cancer research throughout the offshore vessels in the region. He also added that, after a re-tally of miles, Proteus came in with a total of 226.6 miles recorded, reclaiming the win from the Asgard (but, most certainly, it was not a competition).

Last year was riddled with rough seas for the offshore industry; the walk was a refreshing change of pace and inspired comradery focused on a worthy cause. Captain Smith reflected on the significance of last year’s event and remarked “the real winners were the Deepwater Dames and Susan G. Komen’s Race for the Cure.”

This year, October 1-3, the rigs plan to walk again in support of breast cancer and invite you to join in on the fun and the fundraising. Deepwater Dames will be partnering up with the rigs to organize what will hopefully be a Gulf-wide event. As Michelle once said, “it’s all for the love of second base. Save the ta-tas.”

If you would like to read more about Michelle’s breast cancer survivor story, how she came to be involved with Susan G. Komen, and the man she met on a walk who saved her life please click here. If you would like to join the Deepwater Dames please go to the3day.org website and register.

I worked offshore from 2014 to 2020. I passionately support the careers of women working on the water. I hold the position of VP at Women Offshore.

Walking for a Cure While Offshore

For the Love of Crawfish, Episode 14