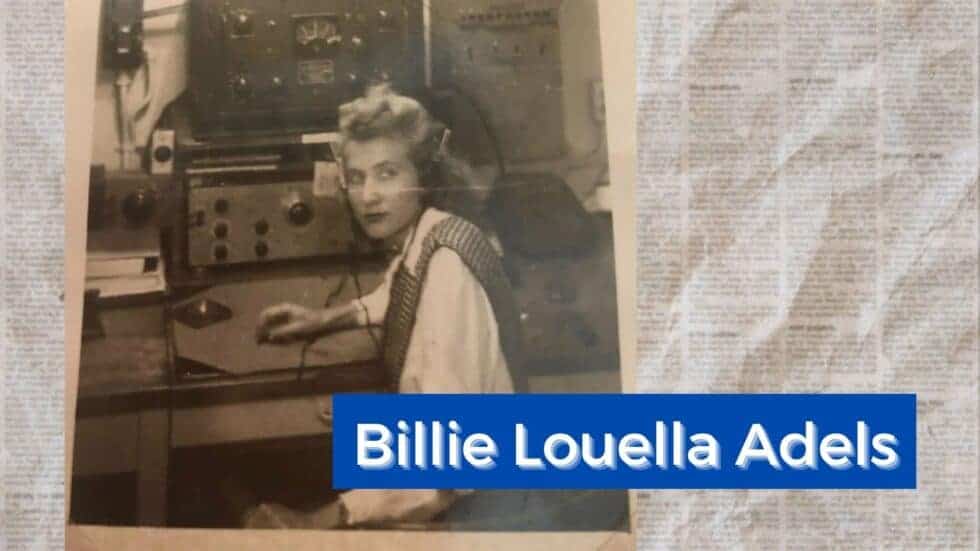 Based on research & phone interview by Sheila Sova

It was a different world for women back in the 1940’s. While men went off to war, women entered the workforce in large numbers to support the war effort. Some went to work at the shipyards, becoming welders and riveters. Others worked in new facilities that seemingly opened up overnight, such as munitions factories and parachute plants.

Billie Louella Adels was never one for conformity and instead would set sail on a new career that would literally set her apart from other women of the day. She would become a Merchant Marine Radio Operator, serving in WWII.

Billie was born in 1921 in Hawaii, and even called Australia her home for a short period of time. Her father was an international salesman which kept the family on the move. They lived in several states including 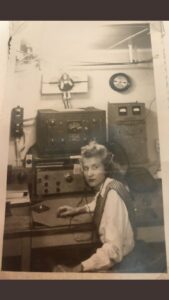 As often as the family moved, Billie took on a new school, a new job, or enrolled in a new university. Her jobs included working at a laboratory for Kraft, Eastman Kodak, and the U.S. Weather Bureau. Billie was one of two women putting up weather balloons at night, just one of many “firsts” that Billie would achieve in life.

This trailblazer wanted to see more of the world, and soon found that volunteering in the Merchant Marine was the best way she could serve the Allied war effort. Very little has been written about the women who put their lives on the line in the U.S. Merchant Marine for the war effort.

In total, she spent a decade as a Merchant Mariner.

Billie registered as a Stewardess in March 1944, according to the Norwegian War Sailors Logbook. Norwegian ships sailing from U.S. ports had female crew members in several roles.  Archived vessel crew lists indicate she served as Purser, Stewardess and Radio Operator. Residing in San Francisco at the time, Billie took time off to attend a six-month radio operator school, which she completed in just four months. She does not recall the name of the training facility; however, our research has turned up a few different training facilities on the West Coast, such as an Alameda, California-based Radio Operator’s school operated by the U.S. Maritime Service.

Further research indicates that Class I or II Radio Operators had to achieve high levels of proficiency in Morse Code interpretation. However, a Radio Officer was usually considered more of a Staff Officer, thus holding lesser rank than other shipboard officers.

At sea, Billie embarked on voyages to some of the most dangerous ports of call, including Iwo Jima and Guadalcanal. She sailed into many countries including France, Germany, Argentina, Belgium, Norway, and Columbia. Sailing under the Norwegian flag, Billie served on several ships including M/S General Ruge (formerly U.S.-flagged M/S Cape Arago), Edward J Berwind,  Hoyanger, and Jotunjell. When the war ended, Billie sailed on American ships, including the S/S Gulf Banker. In total, she spent a decade as a Merchant Mariner.

According to a newspaper interview in the Oregon Bend Bulletin, June 1950, Billie recalled being ordered off a ship after a Captain learned that Billie was not a man’s name. However, Captain G. H. Melichar of the S/S Gulf Banker is said to have praised “Sparky” for her work; the  officers and crew said, “She is just like a sister.”

After the war, Billie went to work for a shipping company in Los Angeles. Her boss, a graduate  of Auburn University, suggested that Billie should consider this facility. She soon embarked as a student at the Auburn University College of Veterinary Medicine, fueled by her love for cats, which she had often kept as companions while at sea. She was the only woman to graduate in 1958 from a class of 63 students, and only the 7th woman to graduate from Auburn College of Veterinary Medicine. 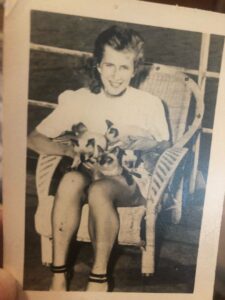 Billie married Harry Norbert Pennings after graduation, and being the trailblazer that she was, Dr. Billie Pennings opened one of the first “feline only” veterinary clinics in the country in 1959. She retired in 1991 at the age of 70, only to continue with volunteer work at the Galveston Seaman’s Center. She also served on the Board for the Galveston Pilots, as appointed by the Texas governor.

Billie is now in the process of obtaining her Honorable Discharge DD214 from the U.S. Coast Guard, to become the fourth known female WWII U.S. Merchant Marine Veteran. Dr. Pennings will be recognized on Maritime Day (May 22nd) in Washington D.C. (COVID permissible), and is slated to be honored with the Norwegian Convoy Cup Award from the Government of  Norway.

∙ Mary Collom Kimbro of Tennessee was the first female Merchant Mariner killed in  WWII. At 64 years old, she was Stewardess on board as the American passenger ship S/S  City of Birmingham as it sailed out of Norfolk, Virginia on June 29, 1942. On the evening  of the 31st while off the coast of Cape Hatteras NC, City of Birmingham was hit with two  torpedoes, quickly sinking the vessel. Six crewmen, including Mary Cullom Kirmbro,  and two passengers were lost. On April 6, 1945, the 90th-built liberty ship was launched  at Panama City, named the S/S Mary Cullom Kimbro.

∙ Clara Gordon Main was taken off of the S/S President Harrison by the Japanese Imperial  Navy while making a military mission between Manila and North China in the China  Sea. The entire crew was captured, and Mrs. Main spent two years in a POW Camp. This  occurred the same day as the Pearl Harbor attack, so it never made headline news. She received the Merchant Marine Meritorious Service Medal. At that time, she was the only  woman known to have received it.