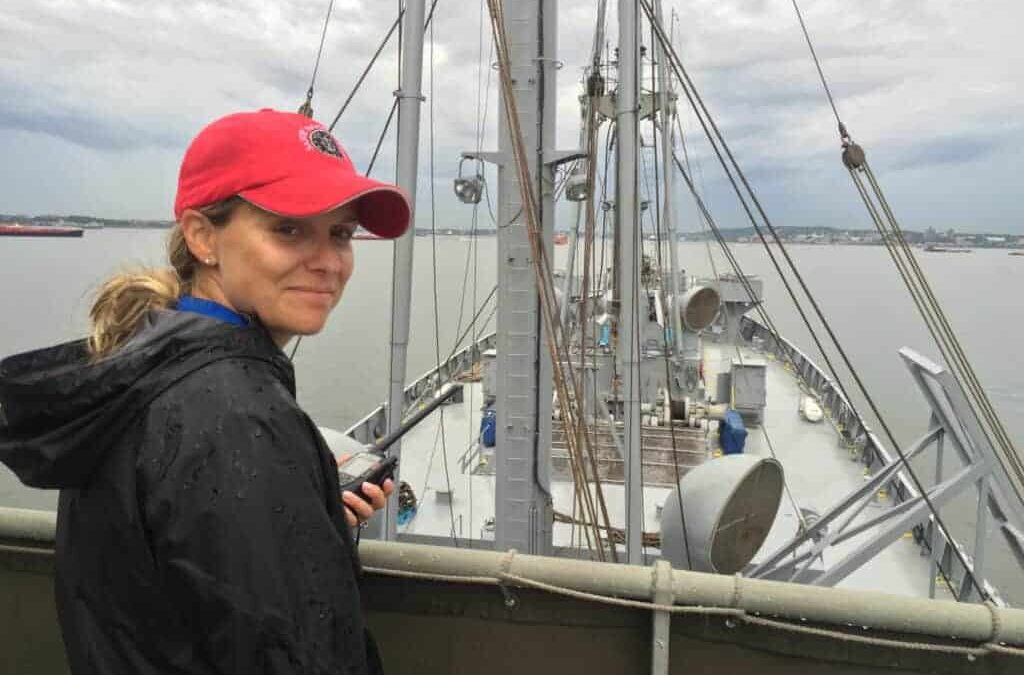 Meet Captain Karen Nola from Annapolis, Maryland.  Karen is a graduate of the United States Merchant Marine Academy (USMMA) in Kings Point, New York.  With experience all over the world, including Antarctica, Karen has worked on the water for over twenty years and is an accomplished maritime pilot in New York and New Jersey waters.

As a maritime pilot, Captain Nola is a navigational expert for a port of call.  She is a highly skilled sailor, who trained for years to maneuver ships through dangerous and congested waters.  At any time of day, Captain Nola possesses detailed knowledge of a particular waterway, including the direction and strength of the wind, current and tide.

Before entering a port, Captain Nola meets a ship, by way of a small boat, to then maneuver that ship to her berth at a dock (pier).  This requires teamwork with the ship’s captain, ship’s crew, port tugs, and shore linesmen.  She also communicates over the radio to the assisting tugs and linesmen.

Captain Karen Nola opened up to Women Offshore about her career and what inspired her to work on the water. Here’s what she divulged: 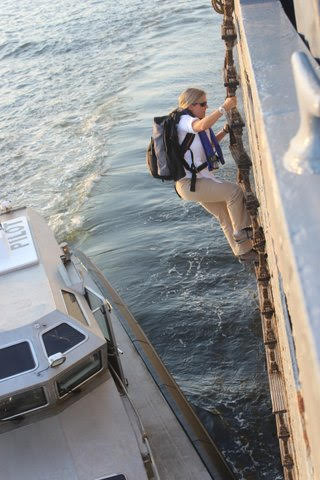 Maritime Pilot, Captain Karen Nola climbs aboard a ship to navigate it into port.

Captain Nola, what inspired you to work on the water?

“I was inspired by the liberty ship, the SS John W. Brown. I grew up volunteering on board the ship since I was the age of twelve.  I learned everything from them.  She was even my first third mate job!  When most people were partying, I was working on the ship.”

“It does not feel like work to me.  It’s fun, and I get to play with big ships and meet different people every day.”

What’s one lesson from your seagoing career that prepared you to become a pilot?

“I think projecting confidence, even when you may not feel confident, helps in every aspect of life – not just at work.  As a pilot you are looked on to be the expert and know what to do in certain situations.  So, what you project can determine what type of actions you get from the captain and crew of a ship, such as in the case of an emergency, for example.”

“Some foreign countries still aren’t used to women.  I try to ignore that part. (I will say, for myself personally, that the most challenging and dangerous part is climbing up and down the ladder on the side of the vessel!)  Furthermore, the economy is constantly changing and the ships are getting bigger. It’s hard to arrange your association for the future when you don’t know what that entails, including how many ships will arrive in a given year.”

“I think sending out information about it will help. We need to let anyone, not just women, know that pilot associations are hiring and looking for maritime graduates all over the country.”

Thank you, Captain Nola, for sharing your career with us! You’re an inspiration to so many women, striving to become pilots in this industry. We look forward to following your career as you encourage more women to pursue the pinnacle of your industry: the maritime pilot.

The featured photo at the top of this article was taken on board the SS John W. Brown, one of only two remaining, fully operational Liberty Ships that participated in World War II. The SS John W. Brown was built in Baltimore and launched from Bethlehem-Fairfield on Labor Day, September 7, 1942. For more information, visit the SS John W. Brown’s website.