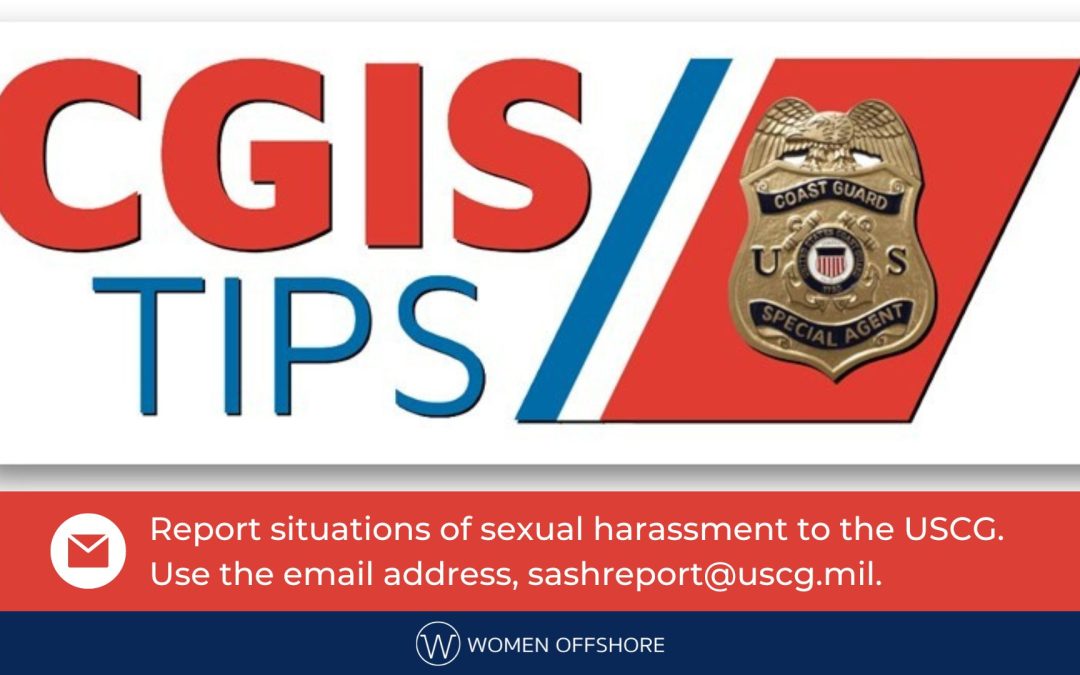 Women Offshore wanted to know what the USCG’s stance is on reporting sexual harassment. We asked and this is what we found out.

In the past, the majority of sexual harassment incidents were investigated by company representatives and handled internally without a report to the USCG. In many cases, the company would ultimately fire a mariner for committing egregious or repeated sexual harassment violations; however, Coast Guard investigators would only follow-up with a suspension and revocation investigation in instances where the company made a voluntary report, the victim or bystanders reported the incident, or Coast Guard investigators discovered the misconduct during a logbook review.

The USCG wants victims and bystanders to continue reporting sexual harassment incidents to their company officials, who are required by U.S. law to have anti-harassment policies in place. The company should know about them, investigate, and have a chance to take the proper actions to address the misconduct and restore a respectful work environment.

Sexual Harassment is on the Continuum of Harm, Impacting Culture 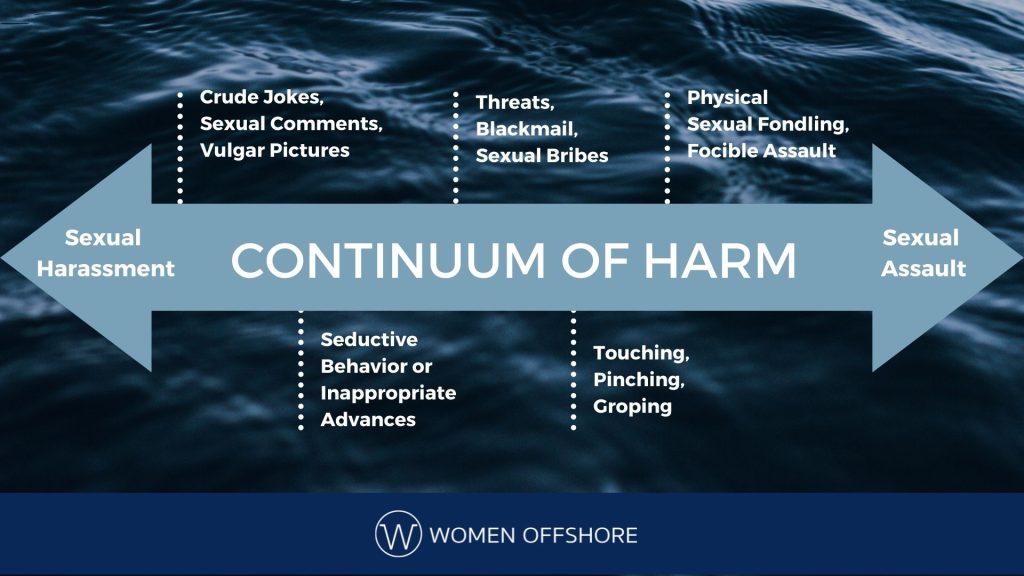 Addressing behaviors across the continuum of harm is key to prevention efforts. The continuum of harm refers to a range of “inappropriate actions, such as sexist jokes, hazing, and cyber bullying that are used before or after the assault and or supports an environment which tolerates these actions” (DoD 2016 Workplace and Gender Relations Survey of Active Duty Members).

In many instances, a sexual harassment case can be addressed at a low level without the need for USCG involvement (e.g., an inappropriate poster is removed from a common workspace, a mariner ceases using sexually explicit language after being confronted, etc.).  Unfortunately, there have been cases where a company has tried to protect a senior officer or downplay unacceptable harassing behaviors, which have led to incomplete or substandard administrative investigations. Thus, the USCG and Women Offshore want to emphasize that the USCG is a good reporting option for sexual harassment offenses where the company has failed to take appropriate action, where the offender continues to commit violations after being confronted, or any case where a victim feels targeted by an offender (e.g., stalking, directed sexually explicit comments, etc.).

The USCG has two ways to report harassment. Submissions can be made regarding cases going back as far as 3 years. The first option is through the CGIS Tips App or form. The USCG’s Suspension and Revocation Center of Expertise (NCOE) is coordinating all administrative SASH investigations and they have established an email address for reporting non-emergency SASH incidents at sashreport@uscg.mil.

During a meeting with Women Offshore, Captain Jason Neubauer, the USCG’s Chief of Investigations and Casualty Analysis, stressed that the USCG is committed to investigating SASH incidents and holding perpetrators accountable in order to protect the safety of all seafarers and improve the overall culture at sea.

About The Author: Christine MacMillan

Christine is an experienced mariner who is passionate about helping women+ navigate careers on the water. She is a graduate of the US Merchant Marine Academy, licensed as a USCG unlimited chief mate, and worked on various ships for 8 years post graduation. As the S.A.V.E. Program Coordinator at Women Offshore, Christine manages and oversees the organization’s relationships and development of prevention, response, recovery, accountability and shipboard climate change initiatives, such as victim support resources, reporting avenues, bystander training, and awareness campaigns.