On a Rising Tide in the US Coast Guard, Karen Kutkiewicz Makes Waves to Antarctica 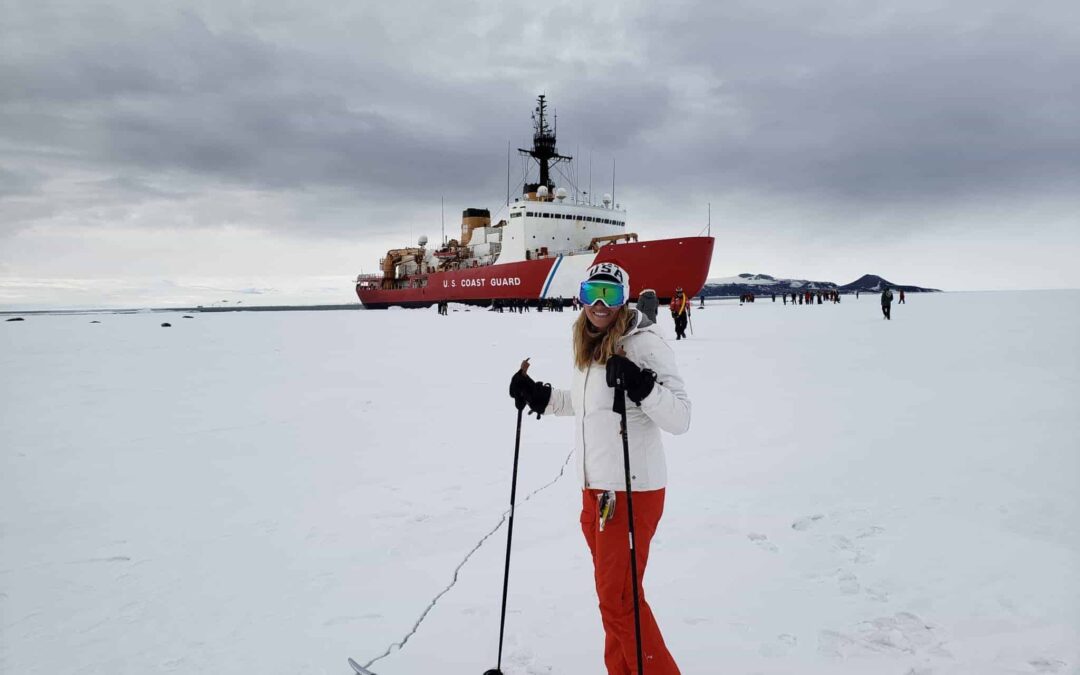 In 1976, the United States Coast Guard Academy opened its doors to women. Today, we explore the history of women in the US Coast Guard and one woman’s journey to break barriers as a cutterman and mom.

On July 8, 1975, Congressman Lester Wolff of New York introduced a bill, H.R. 8414, to allow women at the U.S. Coast Guard Academy in New London, Connecticut. After hearing about the bill, the Secretary of the Transportation, William Thaddeus Coleman, Jr., approached the Commandant of the United States Coast Guard, Admiral Owen Siler.

Secretary Coleman had a question, “Admiral, are there any really valid reasons why women should be kept out of the Coast Guard Academy?”

Admiral Siler’s response was in the negative.

Coleman then asked, “Do we have to wait for Congress to act upon this?”

Siler’s response was that there was no need to wait.

Thus, legislation moved forward. Women were integrated into the active-duty and reserve forces, and in 1976, the United States Coast Guard Academy opened its doors for the first time to women. Thirty-six women joined the corps of cadets, and of them, fourteen graduated and pursued their first assignments at sea as Ensigns, the most junior commissioned officers of the U.S. Coast Guard.

Fast forward thirty years later, Karen Love, from Des Moines, Washington, walked across a stage of the commencement ceremony at the United States Coast Guard Academy. With a Bachelor of Science in operations research and computer analysis in one hand and a commission in the U.S. Coast Guard in the other, Ensign Love was eager to navigate a career around the world.

Since graduating from the Academy in 2006, she has worked in operations afloat and public affairs. She has navigated ships 62,000 nautical miles, including waters off fifteen foreign countries, and trained more than sixty personnel in navigation, seamanship, and security procedures. In 2013, she expanded her education by earning a Master’s Degree in Public Relations and also married a mariner, Captain Todd Kutkiewicz. 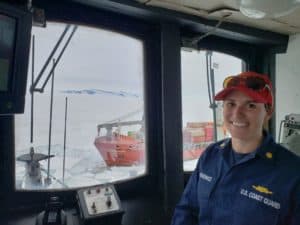 Six of her thirteen years with the Coast Guard have been underway. On the cutters Hamilton and Boutwell, the now Lieutenant Kutkiewicz engaged in search and rescue, law enforcement, maritime security, and national defense missions. While leading law enforcement teams, Kutkiewicz seized more than forty tons of cocaine and kept it from reaching American soil.

Currently in the Pacific Ocean, Kutkiewicz is navigating the United States’ only heavy ice breaker, called the U.S. Coast Guard Cutter Polar Star. Commissioned in 1976 and built by Lockheed Shipbuilding and Construction Company of Seattle, Washington, she is one of the largest ships in her fleet and one of the world’s most powerful non-nuclear ships. The Polar Star just completed a successful Operation Deep Freeze at McMurdo Station, Antarctica. This is an annual mission that involves breaking an ice channel to escort supply ships to replenish the station for the year.

As an operations officer and navigator, Kutkiewicz has achieved the rank of Lieutenant Commander (LCDR), accountable for the safe navigation and operations of her vessel. Last month, she qualified as an ice pilot, an accomplishment with a steep learning curve to prepare for ice navigation in the Polar Regions. For LCDR Kutkiewicz, this training took her beyond her comfort zone, “It had been ingrained in me not to hit anything with the ship. And on an ice-breaker, we are intentionally backing and ramming to break the most pressurized spots, we are capable of breaking ice up to 21-feet thick.”  Karen states that ice-breaking is about “patience, power, and finesse.”

At sea, LCDR Kutkiewicz calls her family weekly from a satellite phone. When she joined the Polar Star late last year following maternity leave, her son was a newborn and her daughter was a toddler. It is not uncommon for LCDR Kutkiewicz to receive questions about how she can leave her family for months at a time. LCDR Kutkiewicz confidently states that her career path is what is best for her family. She looks forward to retiring from the Coast Guard in her early forties, visualizing a life of living aboard a boat with her family and coaching her children’s sports teams. 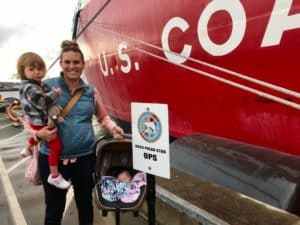 LCDR Kutkiewicz acknowledges that maintaining a career at sea as a mother could not be possible without the support of her husband, Captain Todd Kutkiewicz. With pride, she adds, “The only way that I can pursue my dreams of being a cutterman is because my husband Todd supports me. He challenges me to be the best I can. He understands the value and purpose of life underway.”

Captain Todd Kutkiewicz is a graduate of the United States Merchant Marine Academy and an unlimited master mariner of the U.S. merchant marine with nearly two decades of experience working initially for British Gas and now for the Military Sealift Command, an organization that controls the replenishment and military transport ships of the United States Navy. In April, shortly after LCDR Kutkiewicz returns home from Operation Deep Freeze, her husband will prepare to join his own ship to be gone for five months. The Kutkiewicz family are mariners, balancing a family and supporting each other’s career ambitions.

A decade after LCDR Kutkiewicz’s graduation and forty years since the first class of women graduated, a new record was set, 38% of the incoming class at the U.S. Coast Guard Academy in 2016 was female. However, on board the Polar Star, only 13% of the crew are women and LCDR Kutkiewicz is the only female crewmember who is married with children. The Coast Guard recognizes that this is a problem and is specifically focusing on why women are leaving mid-career through a study. That results of that study are due out this summer.

LCDR Kutkiewicz wants to reduce the gender gap on board her vessel. From her experience, retaining more women at sea starts with changing the perception that women on ships cannot be mothers. She eagerly mentors and supports women in the service, encouraging them that pursuing a career at sea, does not mean giving up the idea of having a family.

This month, LCDR Kutkiewicz anticipates a warm welcome home, knowing that four months will have passed since she saw her family. She has been to Antarctica and back during this time, making waves as a role model who is pursuing her career dreams at sea while supporting a family at home.