Meet New Yorker, Amanda Brown, straight from ‘The Big Apple.’  A graduate of SUNY Maritime College, Amanda earned her Bachelor’s Degree in Marine Transportation, which included a minor in Ship Management.  Amanda has a U.S. Coast Guard Second Mate License of Unlimited Tonnage Vessels and has been working on ships for the past 3 years all over the world – from the US East Coast to Eastern Europe.

Women Offshore spoke with Second Mate Brown, where she divulged an interesting tidbit about a very unique crewmate of hers, named Barney.

Amanda, what inspired you to work on the water?

“I aspired to do something not all that common.  Oh, and of course, for the ability to travel the world!” 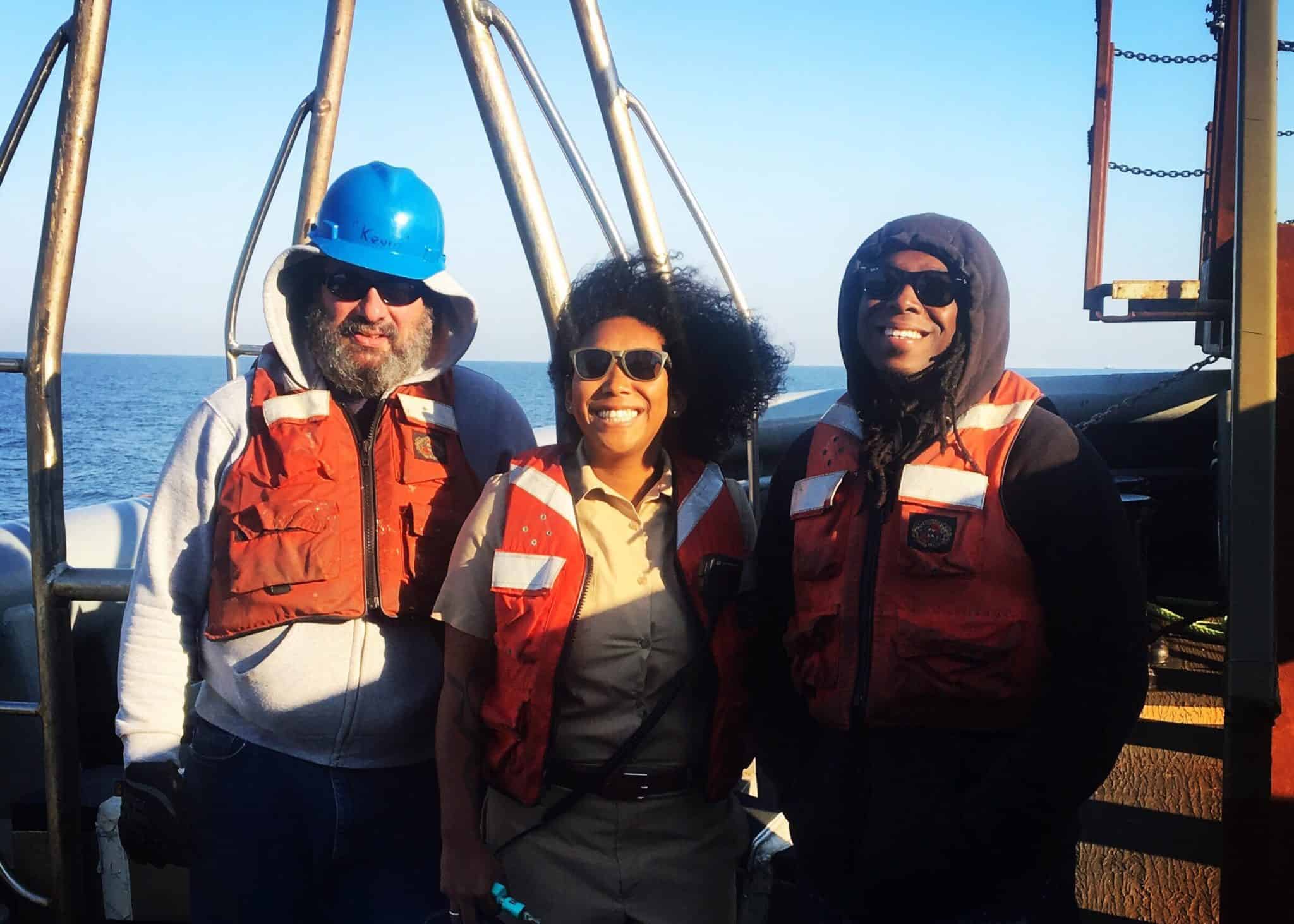 What sorts of challenges have you faced in your career?

“When I first signed onto my current ship in 2015, I was the first female crew member they’d had over the previous 10 years. I was worried about how the crew was going to handle my presence. Fast-forward to 2017:  I had an incident with a contractor; a ‘low-level’ character who had, verbally, crossed the line. The crew caught wind of it and kicked the man off of our ship. They were very supportive. All who were involved gave statements towards a sexual harassment investigation that was launched.  I know I can count on them, which is important:  If you can’t rely on the people that are with you for 6 months of the year, then how are you able to feel a sense of peace?”

“Honestly, I think it is just about getting the word out there.  Granted, this line of work isn’t for everyone, yet being vocal in educating our next generation of females on the career options that are out there for them, the numbers will, inevitably, rise.” 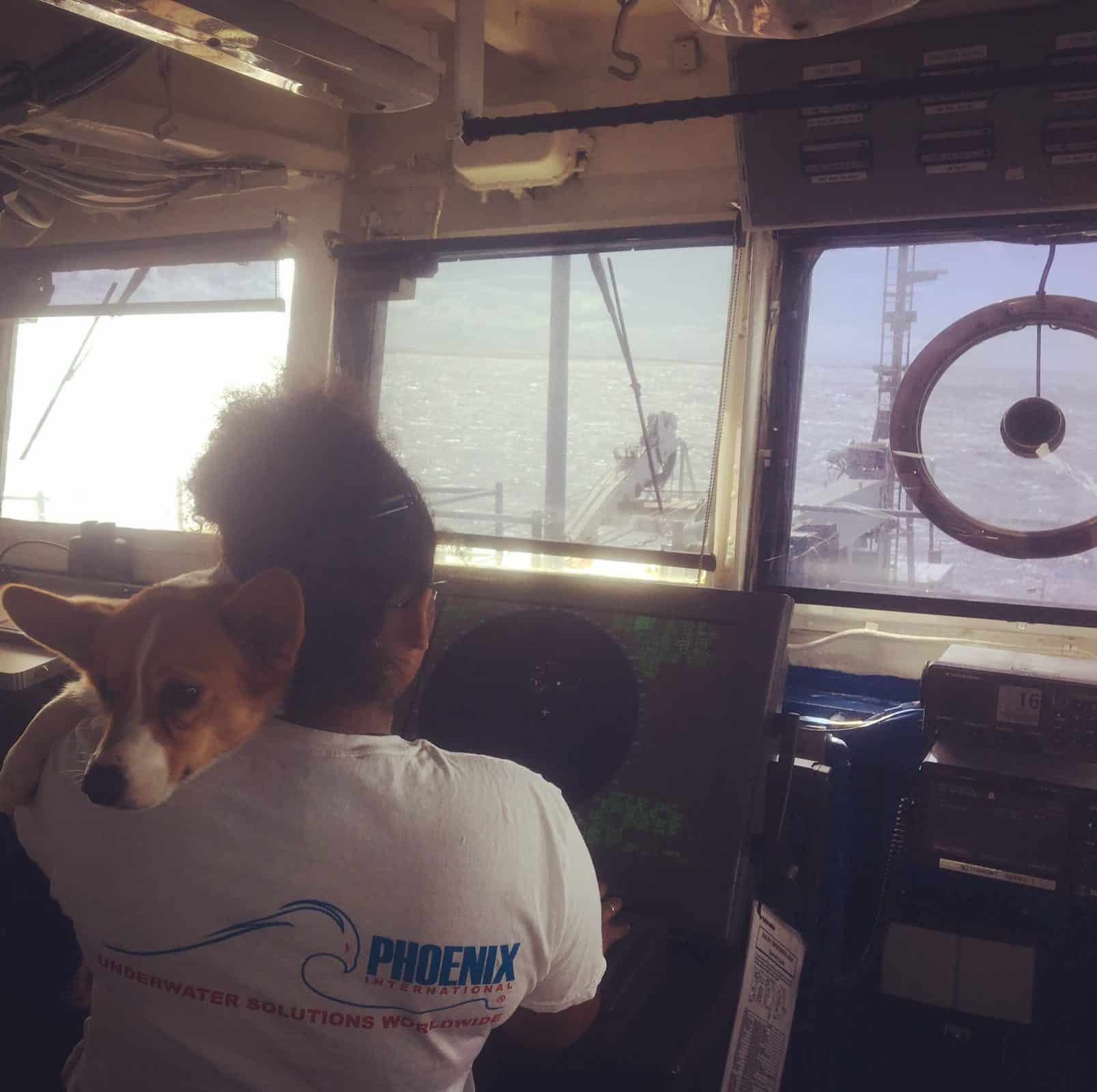 Who is Barney and how did he end up joining your crew?

“Barney is my Corgi dog!  My captain actually approached me with the idea of bringing him along with us on deployments. He gets along with everyone and most definitely boosts spirits of the crew while we are out at sea for long stretches. So far, he has been on two of my deployments. He has a little more than a year’s worth of sea time!”

A dog with a year of sea time – not bad for a pooch!  How does Barney handle being at sea? Does he get seasick?!

“Barney does not get sea sick and we have hit some pretty bad weather. He definitely has his sea legs! I try and take him ashore as much as I can, depending on the rules of the specific country that we are in at that time.”

What has been your greatest adventure with Barney at sea?

“Well, I cant speak for Barney, but I would have to say that our greatest adventure/experience would have to have been in Italy.  We were anchored off the Italian Coast and the ship was having a BBQ and swim call*. I put him in his little doggie life jacket, just in case, and lowered him down to the water. This was the first time he had ever gone swimming, by the way! He is such a mama’s boy that he swam by my side for the majority if the time we were swimming.”

*Swim Call:  “Swim call on a ship is when the ship stops in the open ocean and allows for a couple hours of swimming in the waters around the ship.  It’s a time honored tradition on all classes of ships for hundreds of years.  Prior to the availability of a continuous supply of fresh water, it was the only opportunity to bath as well.”  – Charles Green, Retired USN Submarine Service.

Thanks for sharing a bit of your life with us, Amanda. We wish you the best of luck in your career and wish you safe travels to you and Barney!