Meet Maddiee Kuehner from Brunswick, Ohio. Maddiee is a graduate of Great Lakes Maritime Academy, where she earned a Bachelor’s of Science in Maritime Technology, along with a USCG Unlimited 3rd Mate and a First Class Great Lakes Pilot License.

Maddiee joined her first ship as a licensed third officer (mate) in August of 2016 through the International Organization of Masters, Mates, and Pilots (MM&P). As Third Mate, Maddiee acts as the Safety Officer, inspecting and servicing the safety equipment aboard. Safety equipment on merchant ships can include lifeboats, life rafts, fire hoses, and fire extinguishers. She also navigates from the bridge of the ship, standing what’s called a ‘navigational watch.’ During port calls, Maddiee manages cargo operations, and leads a mooring station in tying up and letting go her ship’s mooring lines.

Women Offshore first connected with Third Officer Maddiee Kuehner at the Women On Water Conference, which was hosted by her alma mater in 2017. Following the conference, Maddiee shared with Women Offshore what life has been like for her post-graduation, navigating large ships all over the world. Here’s what she had to say:

Which parts of the world have you worked in and on what kind of ships?

“So far in my career, I’ve held the position of 3rd mate aboard a car carrier that went through the Panama Canal, to the west coast of the United States, Canada and Japan. I’ve also been on container ships, transiting the waters between Alaska, China, South Korea, and Japan. Lastly, I was able to get some Atlantic Ocean time on board a government contract vessel, headed to a shipyard on the east coast for several months.”

What inspired you to work on the water?

“When I was in high school, I had (what I thought was) a fairly clear plan about what I wanted to do with my life. Sailing a 950-foot vessel on the ocean for 4 months at a time wasn’t it! Low and behold, I ended up enrolling at Great Lakes Maritime Academy and went on my first ‘sea project’ on a ship that sailed around Alaska.  It was that defining moment that I knew that this was the job I was made for. I had no experience with sailing and I didn’t grow up on the water or around ships like most of my classmates.  However, the first time I got to ‘take the conn’ and navigate an enormous vessel by myself, it felt completely natural.”

“I love my job. I’ve never felt that begrudging feeling of having to go to work. It’s more like, “What new adventure am I going on now? Which country will I get to explore next? What new people am I going to get to meet?” Sailing on the ocean makes me happy. I like that I am challenged each day to learn something new, become a better sailor and a more reliable shipmate.

There is a quote that has stuck with me since I first started sailing, that really sums up how I feel about my job:  “Your work is going to fill a large part of your life. The only way to truly be satisfied is to do, what you believe, is great work. And the only way to do great work is to love what you do. If you haven’t found it yet, keep looking. Don’t settle. As with all matters of the heart, you’ll know when you find it.” – Steve Jobs, Apple Inc.” 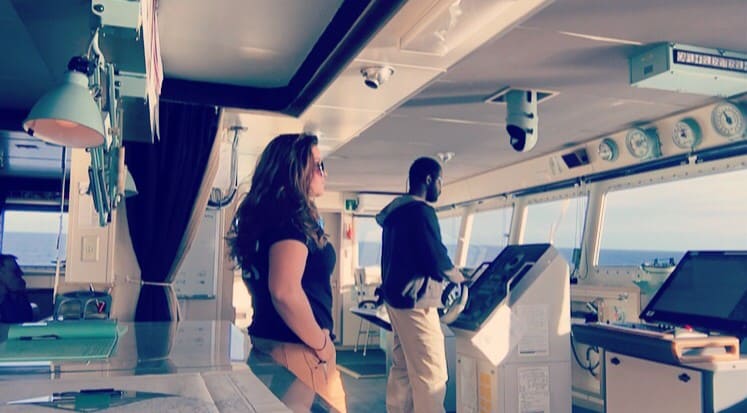 “Most people I talk to think the hardest and most challenging part of my job is being away from home for 4 months at a time. I honestly don’t mind, when you come back you get to appreciate those around you and the simple pleasures of being a ‘land lubber’ that much more. Actually, my biggest challenge so far has been getting lost in other countries! I don’t speak any other languages than English and some scant Spanish.  So, when I get off the ship and explore, having that language barrier is very difficult – especially if you aren’t familiar with the area.”

“In my opinion, more women getting out there and networking with female senior officers and captains that have ‘been there’ and can give advice and be a support system when you’re out at sea. Women who understand the struggles, are better positioned to give advice on how they overcame the same road blocks. I think that could really help more women feel comfortable sailing in a male-dominated industry. Knowing that other females have been where you are, have yet to go and understand ship life and its subsequent trials that come with it. More than that, they’ve become successful in the same career that you are pursuing.”

Thank you, Maddiee, for sharing your passion for working on the water. We look forward to following your career as you make your way to be a captain in the US Merchant Marine. Fair winds and following seas!