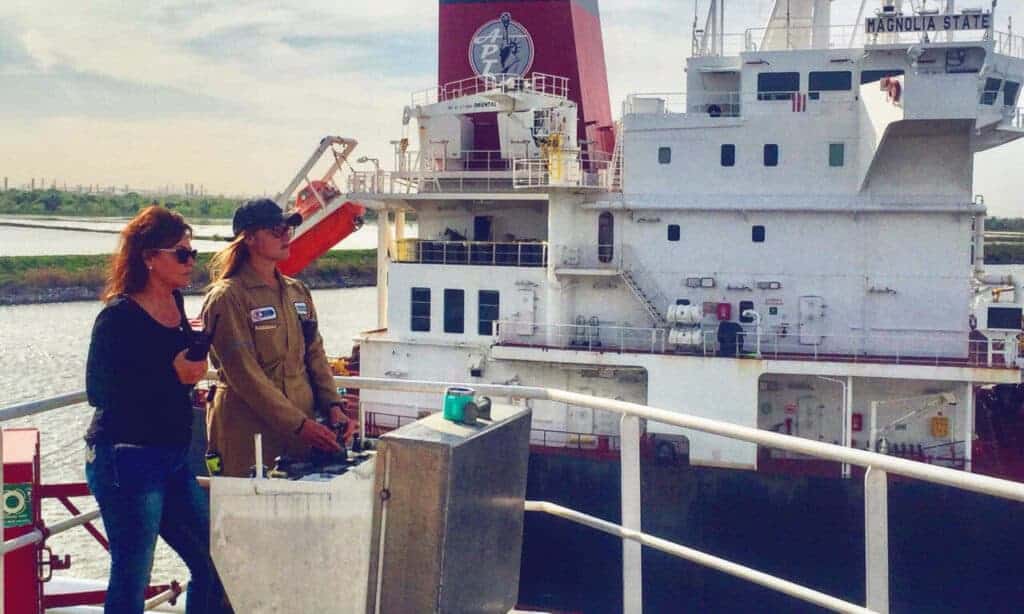 On board a tugboat, a maritime pilot and her daughter navigate together. Today, we explore this chance opportunity for a mother-daughter duo to sail on the same vessel in the 98% male-dominated maritime industry.

A woman in the maritime industry is a pioneer. On most vessels during her career, a woman will be one of the only females on board. Of the 1.6 million seafarers worldwide, there are approximately 32,000 women sailing the high seas and inland waterways; women making up just 2% of the industry.

Women Offshore recently learned of a female maritime pilot who received an assignment to pilot an articulated tug and barge (ATB) out to sea. On board that ATB, the pilot’s daughter – also, the third mate – was standing the navigational watch. Together, this dynamic duo sailed the 700-foot ATB away from a pier and through the Houston Ship Channel.

Maritime Pilot, Captain Sherri Hickman grew up in Milford, Pennsylvania. At a young age, she was inspired to work on the water after observing ships in the New York Harbor. Upon graduating high school, Sherri attended Maine Maritime Academy (MMA) to earn a Bachelor’s Degree in Nautical Science. Since graduating in 1985, Captain Sherri achieved her ultimate career goals:  An Unlimited Master’s License and a slot as a Branch Pilot of the Houston Ship Channel. Captain Sherri has been a maritime pilot for 23 years.

To become a pilot, Captain Sherri trained for years to maneuver ships in congested waterways.  At any time of day, she is prepared to navigate a ship on Houston’s 530-feet wide, 45-foot deep, 50-mile long waterway.

As a pilot, Captain Sherri Hickman is a navigational expert of the Houston Ship Channel. When on duty, she meets a ship, by way of a small boat, to then maneuver that ship to or from a berth at a pier.  Docking a ship requires teamwork between Captain Sherri, the ship’s captain and crew, port tugs, and shore linesmen.

Twenty-seven years after Captain Sherri graduated from MMA, her daughter, Coronado, enrolled in the Academy to follow in her mother’s footsteps. Two years post-graduation, Coronado is a third officer aboard a 700-foot articulated tug and barge (ATB) in the Gulf of Mexico. Her vessel, ATB Liberty, is a 16,320 HP tugboat that is connected by two pins to a 600-foot tank barge that can hold 327,000 barrels of petroleum products.

As a third officer, Coronado’s duties include transferring cargo to and from the barge from a port facility dock. This can be a challenging duty for any mate, requiring one to plan ahead to ensure the vessel and environment are safe. According to Coronado, there is a lot to monitor while cargo operations are happening. “Ballast has to be either taken on or discharged off, while loading/discharging cargo simultaneously, including making sure the bending moments (stresses) of the barge are staying in check along with your list and trim.”

A Chance to Work Together

Earlier this year, it was a day on duty like any other. Captain Sherri’s office called her with a ship assignment, “Captain Hickman, we have a sailing for you…1600 off of Bostco 1, ATB LIBERTY going to sea.”

As soon as she heard it, Captain Sherri knew exactly who was on that ATB. Her first thoughts: “That’s my daughter’s vessel.  How flipping awesome!” This would be their first opportunity to navigate together. Captain Sherri grabbed her gear, including bagels for the crew, to then greet the crew of the ATB Liberty. Mother and daughter at home, and now, pilot and mate together on the water.

Just out of her bunk for the 16:00-20:00 watch, Coronado was caught by surprise to see her mother headed up the gangway. She had navigated the Houston Ship Channel twelve times over the previous two years; always with other pilots, never once seeing her mother at work. Third Officer Coronado transmitted over the UHF radio that the pilot was on board, joking, “I think I’ve seen her around a time or two.”

The ATB Liberty’s Master, Captain John Carraway, then met Captain Sherri on the bridge. He informed her that, rather than him, he’d like for Third Officer Coronado and Captain Sherri to “maneuver off dock together” and that he would capture the historical moment.

This was a learning experience Third Officer Coronado will never forget. “For one, it was the first time I had ever been in charge of the sticks while being alongside the dock. And two, it was all by my mom’s side. While we were waiting for all the lines to come in, my mom started explaining to me each step and why she was pushing or having the tugs pull in a certain way. That information was invaluable to me as a third mate.” Valuable knowledge passed from pilot to mate, mother to daughter.

After the endeavor, Captain Sherri continued to beam with pride. “I cannot tell you how much pride I felt on that bridge wing with my daughter standing by my side taking the controls and following my commands. So professional, even though I’m her mom.  You just can’t make this stuff up.  I knew her late father, who was a marine chief engineer, was looking down on us with his heart swelling with pride and love as well.”

Both Captain Sherri and Third Mate Coronado are thankful for the experience. Coronado is honored by the trust Captain Carraway placed upon her. Captain Sherri added, “I also can’t thank Captain Carraway enough for allowing us this opportunity and for capturing the moment. A parent can only hope that their child grows up healthy, happy and successful.  After this experience, I know that’s where my child stands.” The first mother and daughter to graduate from the cadet program at Maine Maritime Academy was already a remarkable achievement, that they had worked together on the water was a historical moment for the books.

A Family’s Calling: A Career at Sea

As for her future, Coronado plans on sailing for a while, enjoying the benefits of working half the year, “There are not many jobs out there that you can say you work half the year and can do pretty much whatever you want in your time off.” Perhaps one day, Coronado will sit for an exam to become a maritime pilot, just like her mother. For now, she’s enjoying the challenges and dynamic environment on board an ATB – something her mother can now say she did alongside her daughter.