Yoga on the Helideck 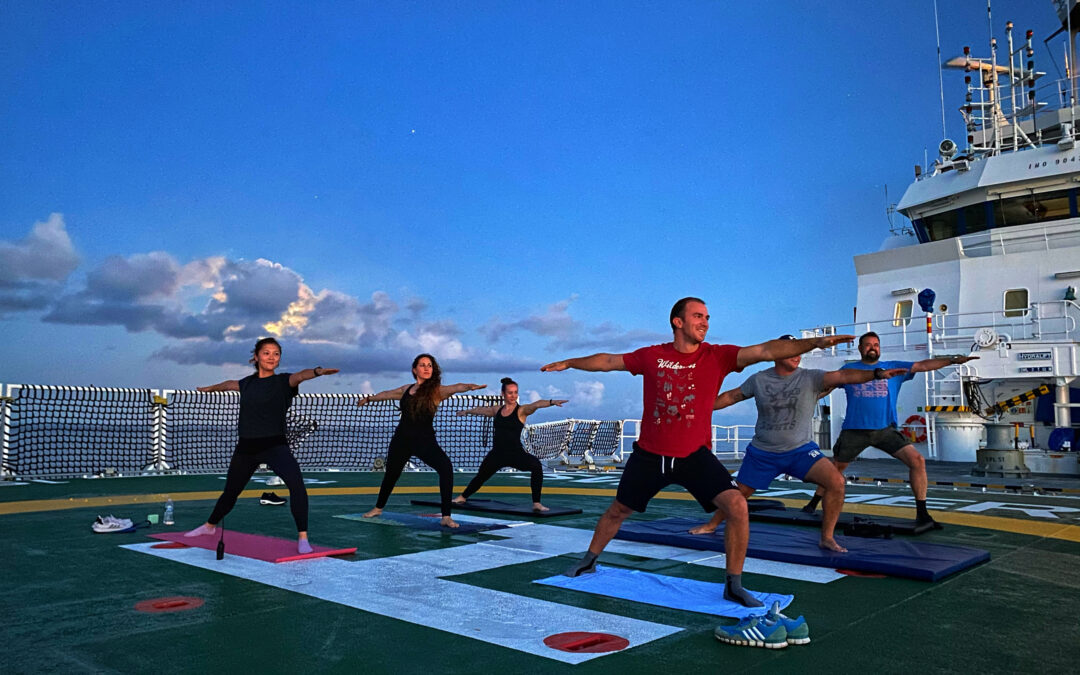 In the summer of 2020 I was kindly asked to do a double trip as Kazakhstan closed the borders. It was quite new for all of us, and everyone was affected in different ways. My best way to cope with stress is yoga. I have been practicing yoga since I was at university and continued to do so when I joined working offshore. What can be more beautiful and relaxing than morning yoga during sunrise, with the view of the ocean from the helideck?

I have always been very shy about my yoga hobby, and only did it in a very hidden place in front of the helideck. I liked to feel that it is my own secret and only few officers from the bridge and able seaman’s (AB) knew what I was up to. It was adding a magic feeling of being on my own and helped keep my mental health up.

But during the Pandemic something changed. I was feeling lonely and more stressed about my family and loved ones back at home. Usually, I worked as the only female onboard which made it more challenging to find a co-worker who understood my feelings and more feminine way of pursuing the world. That trip, during the summer of 2020, I was lucky to have 3 more women on board who were working as Protected Species Observers (PSO). We had a few opportunities per day to chat, however I wanted to collaborate more. Due to assigned shifts and operational needs we only managed to have lunch or catch up during short coffee breaks in the Mess Room.

One morning I saw the PSOs on the Bridge and instantly got the idea in my head: get together and have yoga classes! The idea was fresh in my mind, and I needed to discuss it with my Shift Leader and Party Manager first. I got support from my Shift Leader as he understood how it is important to keep morale up. Next step was to talk to Party Manager. I created a thorough plan and considered safety measures as to not compromise production, and presented him with my idea. At that moment I was very nervous as it was very important for me, and the PSOs were already excited about the possibility to have yoga classes. Our Party Manager listened to my plan carefully, asked a few questions and gave the idea his approval.

My safety measures were to confirm classes’ time with my Shift Leader every day and take a UHF radio with me in case there would be an urgent need for me back in the Instrument Room or on the Back Deck. From that day forwards, I was coming on shift, checked ShipWide for Start of Line and End of Line time and called the PSOs on the radio channel 2:

During sunsets the PSOs would hand over the marine mammal watch to the Passive Acoustic Monitoring (PAM) operator and go straight on the helideck where I was waiting for them. We started the session with a bit of chatting and getting warmed up. And I wasn’t hiding anymore – I had huge support from management and felt great by sharing this experience with my new friends from all over the world. So, we occupied the whole helideck for our activity.

The daily announcement on the radio was always heard by other departments on that channel, and with every day we were getting more listeners. All crew members found this initiative very interesting and funny at the same time, calling us “Girls Yoga Club”. One day, during the lunch, when the Chief Mechanic jokingly called us the “Girls Yoga Club” again, I invited him to join us so it won’t be only girls club anymore. We were opened for everyone, no matter the gender, age or flexibility level. I assured everyone that we would be taking it slowly and that no one will feel awkward. He laughed. But he came. And not alone – his department also joined our Yoga Club, making it officially one of the best moments of the trip. We felt supported by our male colleagues and it changed the way people saw it. Women were empowered by men too.

Every second day I was announcing the time via UHF radio channel 2, getting an acknowledging “Roger” from 5-6 crew members who then would meet on the helideck at sunset. Bridge department was switching on the helideck lights to make it safer, which made it a bit more magical for everyone. We were spending 30 minutes of yoga class and finishing it in relaxing corpse position with calming words “Close your eyes and bring this lovely after-yoga feeling to the rest of your day”. It became our small tradition.

This small initiative changed many things: departments started to talk to each other outside of work, we made new friends and kept our mental and physical health up. After each session we had a cool-down period, and I was spending a few extra minutes to catch up with girls on the latest news. But that’s a secret, don’t tell my Shift Leader 😊

Galiya Sadykova has a background as petroleum engineer and works onboard Shearwater Geoservices’ seismic vessels as an observer operator. She started her career as an intern in Maersk Oil Company, conducting well-test on the biggest Maersk onshore project – Dunga oilfield. Her experience spans international projects, working both offshore and onshore on oil and gas rigs. Recently, Galiya initiated the gender balance network within Shearwater, won the Mckinsey Women Achievement Award, and started her Master’s degree in Offshore Engineering and Shipping Operations.

Raising Daughters to Navigate their Passions

Little Red Boat on the Equator

How You Can Empower Women at Sea