The letter ‘X’ in the old adage, “X marks the spot,” has all but washed up, as the trendier letter ‘G’ has taken its place.  That’s right, folks!  You want to find that gold?  G-Spot claims to know exactly where it is and how to help you find it.

Several weeks ago, I was contacted by a fellow Canadian Geologist via a professional social media site, who lives and works a few thousand kilometers away.  He needed a female, offshore industry professional’s point of view.

Enter, Andy Abraham; a recognized expert 3D Geologic Modeller and Geologist in North America and Europe.  He came across a website for a gold exploration company, who had abbreviated their name and the word ‘gold’ to, simply, the letter ‘G.’  The golden ‘G-Spot’ had been found!  Over several weeks, Andy wrote and posted an article, based on not only our conversation, but conversations with others in his professional circle.  The excerpts below, are from his aforementioned article of his musings on the muddled matter.

The mining and exploration industry and, for that matter, all the resource industries, have made progress towards inclusion, diversity and combating sexism in the workplace.  Many of the major companies have implemented programs and initiatives for employment equity and education.  With this in mind, some might be so glib as to pat themselves on the back and say, “Job well done.” However, we don’t have to look far or deep to realize there is still a long way to go.  A case in point is the quote I recently found on a company website:

Personally, I find this this type of language embarrassing and disappointing. I honestly can’t believe that these attitudes persist in our industry and can be so blatantly displayed.

Two of my female friends who agreed said the following: 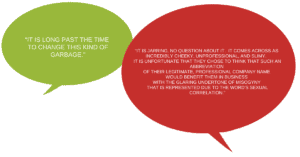 Women were not the only ones unimpressed with the company’s language use.  A couple of my male friends said: 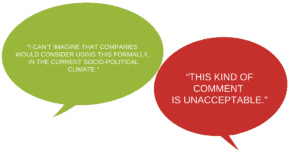 Does this company’s message attract interest and business?

Great question.  Does this company’s message attract interest and business?

Unless, it’s not jarring to many professionals at all?  One has to wonder, as ‘booth babes’ (hired models used to attract professionals to various different company booths, solely based on their often scantily-clad appearance) are hired for, and still have a presence at high-profile mining and energy conventions such as the annual Prospectors and Developers of Canada Convention and CES, formerly The International Consumer Electronics Show, technology’s largest trade show held in Las Vegas a few months ago.

Which begs the question:  Does this type of advertisement help to drum up business?  Furthermore, how much of this scenery puts back the advancement of professional women in the industry with the potential inference to assume an invitation of a sexually harassing nature?  USA Today delved into this touchy subject (no pun intended) this January, following the annual CES Convention in Las Vegas.

Coming from an oil boom town in the Great White Northern province of Alberta, I have seen this type of shock value business marketing, both figuratively and in every literal sense of the word, as seen here.  (Disclaimer:  Sexual inference in content.)  It is a very common and accepted form of language in which the deeply blue collar oil patch, converses with one another.

“I and others also question why a company needs to do this to sell their product and who they hope to sell it to? If your projects and products are that good, sell them on merit alone.

One wonders who would consider investing in a company that promotes itself using this language and who would partner with such a company?

Should we be turning a blind eye and hence condoning actions such as this? Should we continue to shrug it off? Or, should we stand up and say this unacceptable behaviour is no longer tolerated in any industry?

I know I am not the only man who agrees with the latter and believe it is an understatement that companies who continue to use this type of marketing are on the wrong path.”

The wrong path, yes.  But a path that is still current due to having had its ‘uglies’ swept under the carpet and brushed off for far too long.

Many women have spent a significant part of their careers ignoring comments like these knowing that any display of negativity towards inappropriate comments would generally invite further inappropriate comments. Yet this isn’t just about the women who are already in this industry. As companies set goals and strive towards hiring more women these actions are depressingly troubling; especially for academics. Given that in many countries more than 50% of university attendees are women, this type of sexist language in the public domain is part of what drives them away from Geology and Mining degrees.

As a male friend and professor pointed out: 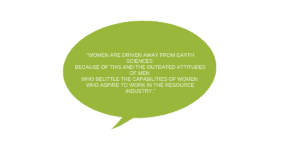 However, Bob Dylan called it correctly, as the times are certainly a-changin’!  Given that female university enrollment is on par with males, it is only a matter of time before those prospective employees and the industry collectives, don’t have to question the percentage of hot air a company’s mission statement or forward-looking statements contain, when push actually comes to shove.

A good friend and engineer (yes geologists can have friends who are engineers) told me that she had informed the company’s CEO that she considered their choice of language was inappropriate, even if it was not intended to offend. She suggested rethinking the name for their product to be more in line with the 21st century.

The company’s CEO responded and apologized. He explained that their intention was to be funny and not offensive and her comments were well noted. He agreed the ’90’s tongue-in-cheek isn’t cute and that they would make changes immediately.

Offended, ambivalent or otherwise – we want to know!

A Pledge to Change an Industry, Episode 35