Release a Man to Fight at Sea 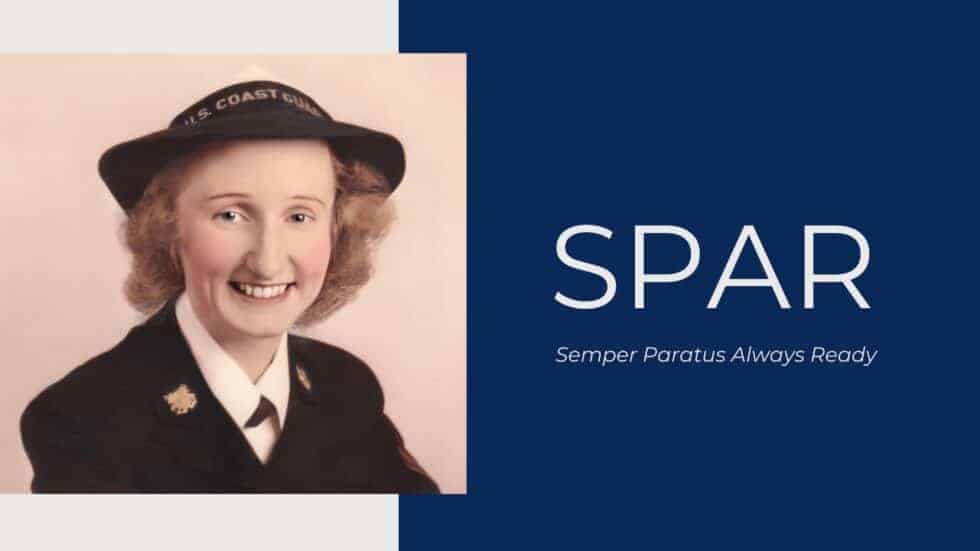 During WWII, the US Coast Guard created the Women’s Reserve known as the SPARS, an acronym for, “Semper Paratus Always Ready.”

By December 7th of 1942, the United States was at war and all men between the ages of 21 and 45 were required to register for the draft. Before the war would end in 1945, 50 million men would be registered for the draft and 10 million would be selected for service. The US Merchant Marine would grow as well, from 55,000 to 250,000 men. With these many men called to serve, this left a large deficit of men available to fulfill the traditional shoreside and support roles needed as the war effort grew. As men left to fight, it was soon recognized that women would be needed to fill in the ranks. By the end of the war, nearly 400,000 women would serve in the armed forces.

The smallest of the armed services, the US Coast Guard created the Women’s Reserve known as the SPARS, an acronym for, “Semper Paratus Always Ready.” Under the guidance of former Purdue University Dean of Women, Dorothy Stratton, the SPARS grew to 12,000 women. “Release a man to fight at sea!” was the recruiters cry and the women of the SPARS made it happen.

Initially, SPARS were brought into service in hopes of capitalizing on women’s civilian experience in traditional “women’s career fields” as secretaries and cooks. The first SPARS became yeoman, storekeepers, cooks and bakers. But as the war continued and women proved themselves to be capable, their roles expanded. Soon SPARS were serving as Radiomen, Radarmen, Parachute Riggers, Cryptologists, Control Tower Operators, Motor Machinists Mates, Gunners Mates and as Coxswains and Boatswains. They secretly helped pioneer LORAN and there were even SPARS rated as Surfmen.

By the end of the war, the US Coast Guard had utilized the highest percentage of women of any of the services. SPARS had proven that women were not merely placeholders; women excelled in physical and technical career fields.

“At Radio School I learned Morse Code and I quickly learned that I loved the radio. I rated the highest in the class! We had to work harder than the men. We had to prove we could do the job!” – Elfie Larkin, 1943 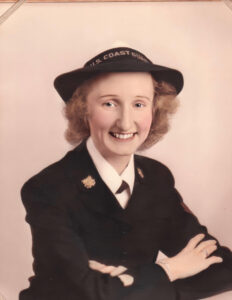 Elfie (Hanson) Larkin was a teacher in her local public school when a friend brought in a pamphlet urging young women to join the SPARS. She decided then that she would join the Coast Guard and on March 3, 1943 she reported for boot camp at Hunter College in New York.

After boot camp she attended training to become a Radioman at Miami University in Oxford, Ohio. “At Radio School I learned Morse Code and I quickly learned that I loved the radio. I rated the highest in the class! We had to work harder than the men. We had to prove we could do the job!”

After Radio School Elfie’s first assignment was in St. Louis, Missouri. While assigned to the 9th Naval District, Elfie helped monitor the maiden voyages of the LST’s (Landing Ship, Tank) and submarines as they travelled the Mississippi River to the Gulf of Mexico from Wisconsin. “Everyone worked long hours, seven days a week. This was an important job. No one wanted espionage to occur while they were on watch.”

In 1944, Elfie was transferred to Honolulu and then Hilo, Hawaii where she worked in the post office using teletext. In both locations she worked in a “Top Secret” capacity mostly working with men. Following this assignment, she worked in a position receiving and decoding messages sensitive to the Pacific War efforts.

After Elfie was Honorably Discharged from the Coast Guard she returned home to New Jersey and used the GI Bill to attend the Melville Aeronautical Radio Engineering School. “My work experience as a SPAR and my love of work experience as a radioman led me to think it would be easy to get a job as a radio operator- maybe even on a ship. After graduation from the school I was told, ‘Women are not radio operators aboard ships.’ Eventually I decided to return to teaching.”

When asked to reflect on her time as a SPAR, she had this to say, “We had a job to do and we did it. I didn’t do anything great. I just did my job and it helped with the war effort. I loved it and if I could, I would do it again in a heartbeat! I was so proud to be in the SPARs.”

Losing a Loved One While at Sea